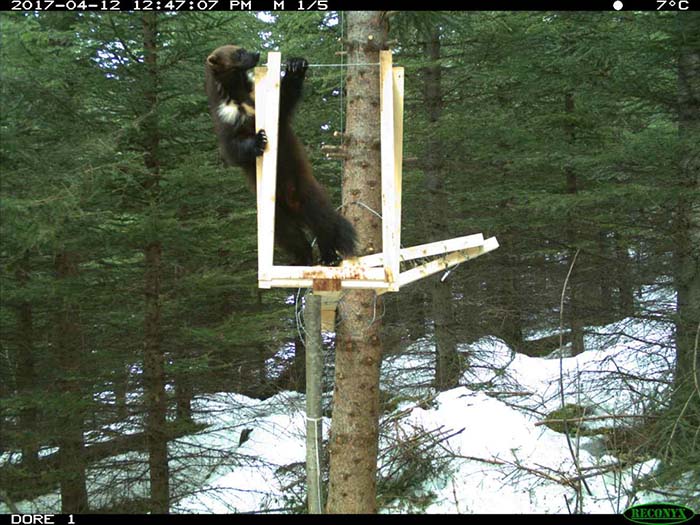 Wolverines are legendary. And even though they are so rarely spotted, McBride, Valemount, Blue River, the wilderness and parks around us are prime habitat for them.

They are sometimes born in avalanche chutes, places few people will ever go and they hunt elusive prey like mountain goats and mountain caribou. We know they can take on a grizzly bear if the stakes are high enough.

But for all the myth and legend that go with the wolverine, there is very little data about how many there are or whether wolverines are in danger.

A recent study in the mountains south of Kananaskis Country south to the American border shows there are much fewer wolverines there than expected.

Those findings prompted Mirjam Barrueto, a Ph. D student in Biological Sciences at the University of Calgary, to learn more about wolverines in the areas where they are thought to thrive: places like the mountains around Valemount and Blue River.

In total she expects there are just 350 to 400 wolverines in this prime habitat, but it’s anyone’s guess, because the wolverine has never been the subject of a wide-ranging population survey.

“We don’t even know: are there 400 or 200? Nobody knows how many wolverines there are because they travel so far,” she said. “They are rarer than a grizzly bear but managed like marten (a member of the weasel family). There is this fear that by not looking we are missing a very crucial time when there is still a population.”

Barrueto is a mountain climber and backcountry skier and friends of hers who work with heli-ski companies mentioned how often they see wolverine tracks. Heli-skiers sometimes see wolverine tracks that carry on for 25 kilometers going straight over glaciers, mountain tops and through valleys. These sitings inspired her to use helicopters in her research.

She says nobody, including government, has spent the time and money to study them on a big scale.

But Barrueto has sunken her teeth into the challenge. She has spent the winter flying into 150 very remote areas with a cast of park rangers, ski guides and helicopter pilots as helpers.

Rather than collaring the animals, which requires tranquilizing them and fitting them with a GPS collar, which could harm the wolverines, Barrueto uses an ingenious tool called a run pole. A run pole uses beaver meat to entice a wolverine to a particular kind of trap, the wolverines can climb up a contraption and make a jump for it, but while they do, a trail camera photographs their face and chest patterns and barb wire collects hair for DNA samples. Researchers can determine their sex, identify the individual, and critically, find out if they are nursing young.

Clevenger said knowing where breeding females are on the landscape will help protect them.

But now Barrueto’s research hangs in the balance.

Her research is incredibly expensive because of the helicopter time. Heliski operations wind down by the spring, but she needs to access her sites twice more to complete the season and make any of her data useful.

Now Barrueto, the mountain climbing and backcountry skiing biologist & statistician has transformed into a fundraising manager. She is reaching out to potential corporate sponsors and critically, local people who care about the wolverine, to finish the research.

Barrueto is hoping the incredible popularity of the wolverine will inspire people to donate using the University of Calgary crowdfunding portal: netcommunity.ucalgary.ca/wolverines or tinyurl.com/localwolverine

“People go crazy when you talk about wolverines. They are iconic. They live on nothing. They can survive a winter eating hooves in the most rugged environment of western North America.”

“Unlike wolves, which eat your cattle, or grizzly bears, there is something about them that makes them much more admirable. They pack 1000 lbs of attitude in 30 pounds of body. They are born in an avalanche chute. Fortunately we are starting to learn much more about them.”