He’s been making biannual visits to the Conrad and Nordic Glaciers near Golden, the Kokanee Glacier near Nelson, and locally, the Zilmer Glacier.

You may have never heard of Zilmer Glacier but it is the second closest glacier of any size to us, about 25 km away as the crow flies from Valemount. It is located in the Canoe Valley just beyond Canadian Mountain Holidays Caribou Lodge. Its peak elevation is 2860 m and its toe is at about 1860 m. Mount Zilmer and its glacier isn’t visible from town but it is fairly easy to find on a map. Travelling south from town on Whiskey Fill Road, Mount Zilmer is visible straight ahead as you pass Cedarside Road.

“So part of what we’re doing is looking at the seasonal mass change of the glaciers: how much snow falls in the winter and then how much snow and ice melts through the summer,” said Pelto.

He said that the research is being funded from a water resources perspective.

“We get money from the Columbia Basin Trust and BC Hydro to do our projects because they want to have a better idea of how the glaciers are faring and how much water is coming out of the mountains.”

Pelto said most automatic weather stations are below 2000 metres, and they don’t give a very good indication of what the glaciers are doing.

“There is not a lot of knowledge about snow or the glaciers above 2000 metres,” said Pelto.

An automatic weather station can determine how much snow has fallen, but Pelto and his team measure both snow depth and snow density in the spring and the fall. In the fall they take one other measure: how much ice has been lost over the course of the summer months.

Pelto said that this physical research is only happening on four glaciers, but they use LIDAR, essentially an airborne laser scanner, to get a broader picture of the region.

“We can make really detailed 3D maps. Once you have that you can make a height change map,” he said.

So when Pelto and crew look at the Zilmer they can see how the height has changed each year. Combined with their first hand knowledge from the surface of the glacier, they can extrapolate what is happening for the 15 or 20 nearby glaciers that are only scanned with LIDAR.

But Pelto doesn’t need lasers to notice the change on Zilmer.

He recalls leaving some stakes near the toe of a glacier, and later realized he hadn’t taken into account the annual melt. He found them five metres away.

“I don’t have the long history of a guide, or a citizen driving down the Icefields parkway every few years, but I’ve spent months on Zilmer and the other glaciers so I have a real attachment to those places. They have changed a lot just in the four years I’ve been there,” he said.

“Part of it is really exciting because you never know what to expect… glaciers are already dynamic, they are so different every year. With the level of melting that the glaciers are experiencing they are really dramatically changing.”

Pelto said that in general spring is coming earlier and winter later so there is more time for melt. That has some pretty serious practical consequences for his research team.

“The crevasses get wider and start to intersect with each other so it’s hard to get across,” he said. “We have had to change our route on the Zilmer Glacier. We used to just walk up the middle of the glacier and weave around a few crevasses,” he said.

Now they take a sweeping arc alongside the glacier to get to its middle because of the growing crevasses.

Pelto has loads of data about his methods and the intricacies of the loss and gain each year, but he has little doubt of the fate of what will be left of the glaciers in the long term.

“We’re still going to have some glaciers, but it will be a poor version of what we have,” he said.

He said there are currently 2200 glaciers in the Columbia Basin.

“There will be hundreds rather than thousands,” he said.  “It will really change our sense of landscape in the region.” 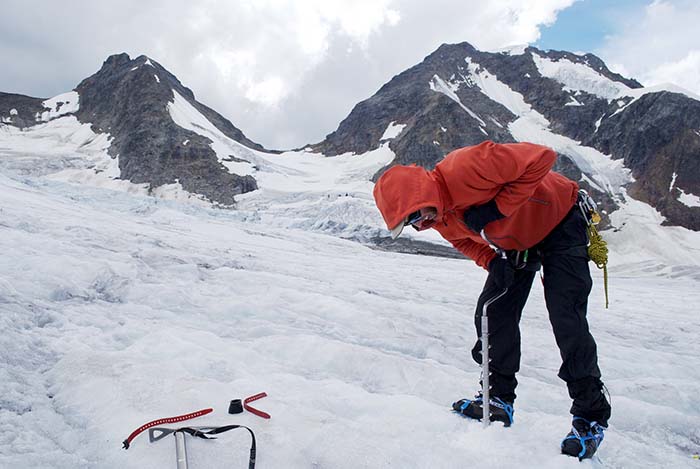