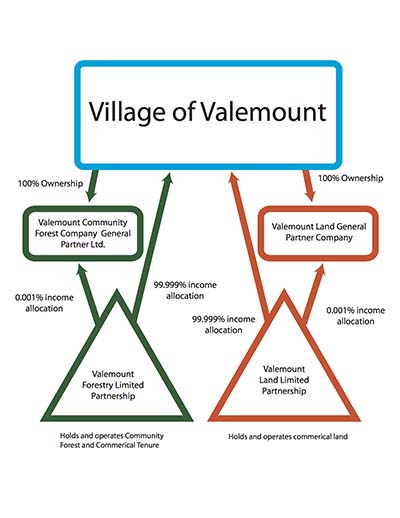 The Valemount Community Forest Corporation (VCF) is seeking to restructure itself, which would split its forestry activities inside Village boundaries from its land use activities outside.

VCF has been owned by the Village of Valemount, but there is a proposal to transfer some of its assets to a new corporation called Valemount Economic Development Corporation and to establish two new Limited Partnerships.

According to Craig Pryor, manager of the Valemount Community Forest, the idea is to insulate the Village of Valemount from liability and to free the community forest from tax implications.

VCF is currently a tax-exempt corporation because it is owned by the Village of Valemount and earns at least 90 per cent of its income from sources within municipal boundaries, according to a letter to the Village from Lidstone & Company Barristers and Solicitors. But the legal company says the community forest’s acquisition of forestry tenures and industrial lands outside the boundaries of Valemount threaten its income tax-exempt status by potentially increasing the income it earns from assets located outside municipal boundaries to more than 10 per cent of its total income.

The legal firm notes that, in the restructured scenario, almost all of the income from VCF and the new corporation will flow through to the Village of Valemount and not be subject to income taxation.

New revenue flowing to VCF in recent years includes income generated from leasing out land in their Cedarside Industrial Park to tenants such as Cedar Valley Specialty Cuts and others.

“Now that we have these industrial lands, we have leases with Kinder Morgan, Dunkley, CANFOR and the Valemount Stone Company. We’re starting to get some income from this thing,” he said.

Pryor said revenues not directly tied to the community forest license are growing and that will have tax implications if not managed correctly.

The diversification is good from an economic standpoint, but without changes it could leave the Village on the hook if something goes south.

Pryor said the new configuration will isolate the village from liability.

“As we get bigger and sign deals, the liability grows,” he said. “If there is an accident at the community forest and someone gets hurt, or if a business deal goes sideways.”

Pryor said in the new regime the Village would still choose who sits on the Community Forest board, but councillors would no longer sit on the board.

“Currently there are two village councillors and the economic development officer making board decisions and putting forth thoughts and ideas… that would make the Village liable,” Pryor said.

Pryor said the they are having a meeting Thurs. April 5th 7pm at the Visitor Info Centre to inform the public.

“We want to tell everyone what were doing,” he said.

Also, because the companies would belong to the Village of Valemount, he said it wouldn’t be approved without public consultation.

Pryor said a lawyer and a tax specialist will be on hand at the meeting to answer tough technical questions from concerned citizens.