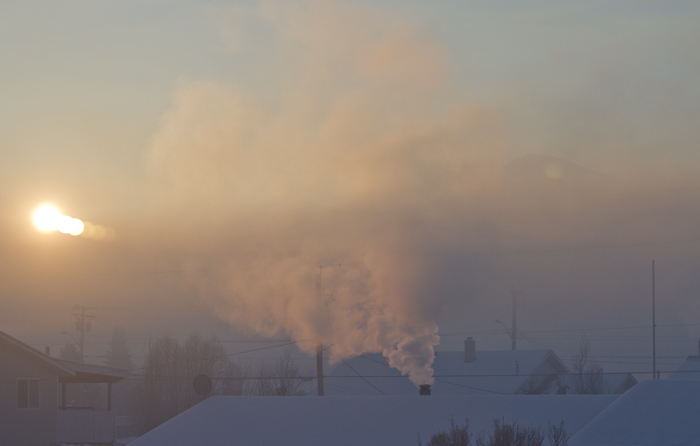 The Ministry of Environment in collaboration with Northern Health has issued an Air Quality Advisory for Valemount due to high concentrations of fine particulates that are expected to persist until weather conditions change.

At 10am, the PM2.5 fine particulate concentration 24hr average was 223.7 micrograms per cubic metre – nine times the recommended limit in B.C.. The concentration peaked at 605 micrograms around 1:30 a.m. this morning.

At 10 am Valemount’s air quality monitor rated the air pollution as hazardous. The air was nearly twice as bad as Beijing’s at that time.

Gail Roth, Air Quality Meteorologist for the region which includes Valemount, says the concentrations are similar to what is experienced by communities affected by forest fire smoke. She says a high pressure system is moving through which means the poor air quality likely won’t disperse soon.

Locals are blaming burning slash piles at 202 Ash for the bulk of the smoke, though cold weather means fireplaces are also going strong. In August 2015, the owners of the 65 acre property at 202 Ash logged the property and stacked the wood debris into slash piles.

Nearby residents say the slash piles were first lit on Friday and have been burning since then, despite provincial regulations that limit burning in municipalities to 72 hours and the local bylaw which states the fire cannot burn between the hours of 1am and 7am.

The smoke control forecast (venting index) issued by Environment Canada has been rated as poor for McBride (the closest location to Valemount) for the past five days. Provincial regulations say the Venting Index must rated “good” on the day a burn is started and forecast to be “good” or “fair” on the following day.

A person who contravenes the Open Burning Smoke Control Regulation is liable on conviction to a fine of up to $200,000

The Village of Valemount Open Air Burning Bylaw states that “Burn piles shall only be ignited when weather conditions are favourable to burn (ie: wind, venting Index- see section 6.4, 6.6); e. No burning shall be commenced or permit issued before the Fire Department member, Bylaw Enforcement Officer or Municipal Representative has approved the site, size and location of burn piles.”

The bylaw further states that “No person shall burn material in any manner which; a. Produces heavy or toxic smoke and/or fly ash which endangers the health, safety or welfare of persons or animals; or, b. Causes smoke to obscure visibility and thereby creates a hazard to the public at large, or traffic on a public roadway; or, c. Creates a nuisance to those in the area.”

If people are concerned someone is not in compliance they can call the RAPP line (Report All Poachers and Polluters) at 1-877-952-7277 or dial #7277 from a cell phone.

Smith says because no compliance officer is in Valemount, his office depends on the public to bring compliance issues to their attention. He says if formal complaints are made to the RAPP line, they would then investigate.

He says the Goat’s inquiry was the first his office had heard of the situation.

The Village of Valemount which issued a burn permits to the property owners did not immediately respond to the Goat’s questions, but released a statement and air quality advisory that said:

“Air quality is particularly bad because of slash burning within the Village. The Burning Permit for this operation has been cancelled, and the Village is working with the applicant to reduce the smoke. All other valid burning permits have been cancelled for now until the weather and air quality has improved. Additional wood smoke is being generated by stores and fireplaces as the cold weather continues.”

The statement is signed by acting mayor Hollie Blanchette.

The advisory says people with chronic medical conditions should postpone strenuous exercise until the advisory is lifted. Staying indoors and in air conditioned spaces helps to reduce fine particulate exposure. Exposure is particularly a concern for infants, the elderly and those who have diabetes, and lung or heart disease.

Tips to reduce your personal health risk.
 Avoid roads with heavy vehicle traffic and areas with wood smoke.
 Continue to control medical conditions such as asthma, chronic respiratory disease and heart failure. If symptoms continue to be bothersome, seek medical attention.
 Maintaining good overall health is a good way to reduce health risks resulting from short-term exposure to air pollution.
 Use common sense regarding outdoor physical activity – if your breathing becomes difficult or uncomfortable, stop or reduce the activity.
Additional tips for those with chronic underlying medical conditions:
 Stay indoors, keep windows and doors closed and reduce indoor sources of pollution such as smoking, vacuuming and use of wood stoves
 Run an air cleaner. Some room air cleaners, such as HEPA filters, can help reduce indoor particulate levels provided they are the right size for your home and filters are changed regularly.
 Take shelter in air-conditioned buildings which have large indoor volumes and limited entry of outdoor air.

Voluntary Emission Reduction Actions
 Where wood stoves or fireplaces are the sole source of residential heat, burn well-cured wood, and ensure an adequate supply of combustion air.
 Avoid backyard burning and any open debris burning.
 Reduce the use and idling of vehicles.