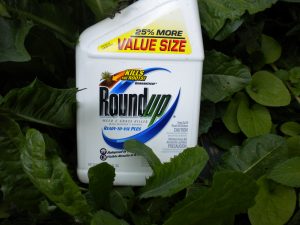 Glyphosate — the active ingredient in Roundup herbicide, which is made by Monsanto — is the most used agricultural chemical in human history, according to a study published in the journal, Environmental Sciences Europe, back in February.

It is also probably found in your body and many of the foods you eat.

Recently, the International Agency for Research on Cancer (IARC) and World Health Organization called glyphosate a “probable carcinogen” — a substance inducing cancers. There is plenty of scientific literature to support this. Even more alarming, glyphosate has been detected in blood, breastmilk and urine samples of most humans tested.

Various countries have allowed, or not, the use of glyphosate in agricultural practice, and the amounts found in their populations reflect this: the American women had glyphosate levels eight times higher than those found in Europeans. The Alliance for Natural Health found glyphosate in most commonly consumed breakfast foods, such as oatmeal, bread, and even in some organic products such as eggs. This is particularly worrisome since foods like eggs should not come in contact with the herbicide; if they contain glyphosate it is because the hens have ingested it and then they pass it on through their eggs.

Well, this is not what the manufacturer and regulators have told us, the consumers.  Besides, Roundup was presented as harmless and environmentally safe, but according to recent studies it does not break down rapidly in the environment, as Monsanto claimed.  It tends to accumulate in nature and animals (including humans), potentially leading to cancers and other health problems.

What many people do not realize is glyphosate is not only used for the production of genetically modified organisms (GMOs) such as soy, corn and beets, which are engineered to be herbicide-resistant when sprayed with Roundup, but also many other crops that are non-GMOs are harvested with glyphosate, too. Yes, even wheat, oats and other crops are desiccated with glyphosate days before harvest.

This explains why analysis found the highest levels of glyphosate in non-genetically modified foods/crops such as wheat cereal and bread. In our northern, cold climate, the farmers had to wait for their crops to dry out prior to harvest, but now they speed up the process by spraying the crops with glyphosate, killing them and accelerating their drying.

When you eat the common wheat bread, cookies or oat cereals, you can be sure you also ingest some amount of the dangerous glyphosate. Other crops such as corn, lentils, flax, rye, peas, millet, potatoes, sunflowers and others (not disclosed by industry) are also killed with glyphosate before harvesting.

While many other pesticides have been monitored by Health Canada, this is not the case with glyphosate; additionally, the legal levels allowed have increased significantly in the past few years. Residue levels that were once considered too high are now seen as normal.

What does glyphosate do in our bodies?

Glyphosate is a very small molecule, and was invented to be used as a “descaling agent”. In other words, to remove the mineral deposits (scales) from pipes. It is a chelator – it binds to minerals and renders them unreactive. Glyphosate does the same in organisms such as plants or bacteria — it deprives them of important minerals (such as manganese – which functions as a co-enzyme) and kills them non-selectively.  This also means that glyphosate is an antibiotic.

Indeed, it kills bacteria, so, once ingested, it also destroys our gut flora, which is made by many beneficial microorganisms contributing to normal digestion, producing essential vitamins and playing a vital role in the immune system, among others.

We have in our intestines trillions of bacterial cells, and their normal metabolism is affected by glyphosate. Levels of less than one part per million (PPM) glyphosate, which is way less than those allowed in most foods today can kill all bacteria (including those beneficial in the gut), cause chronic inflammation, disrupt the endocrine organs and damage the genetic material (DNA) inside the cells.

How can we avoid glyphosate?

This is a very difficult task, but well worth trying. Grow as much of your own food as you can, look for local farmers that might not use glyphosate at all, or grow organic crops. Avoid processed foods containing soy, corn, beets and canola — these are for the most part GMOs and by definition are sprayed with Roundup. Buy certified organic foods as much as possible.

3 thoughts on “How does glyphosate affect your health?”