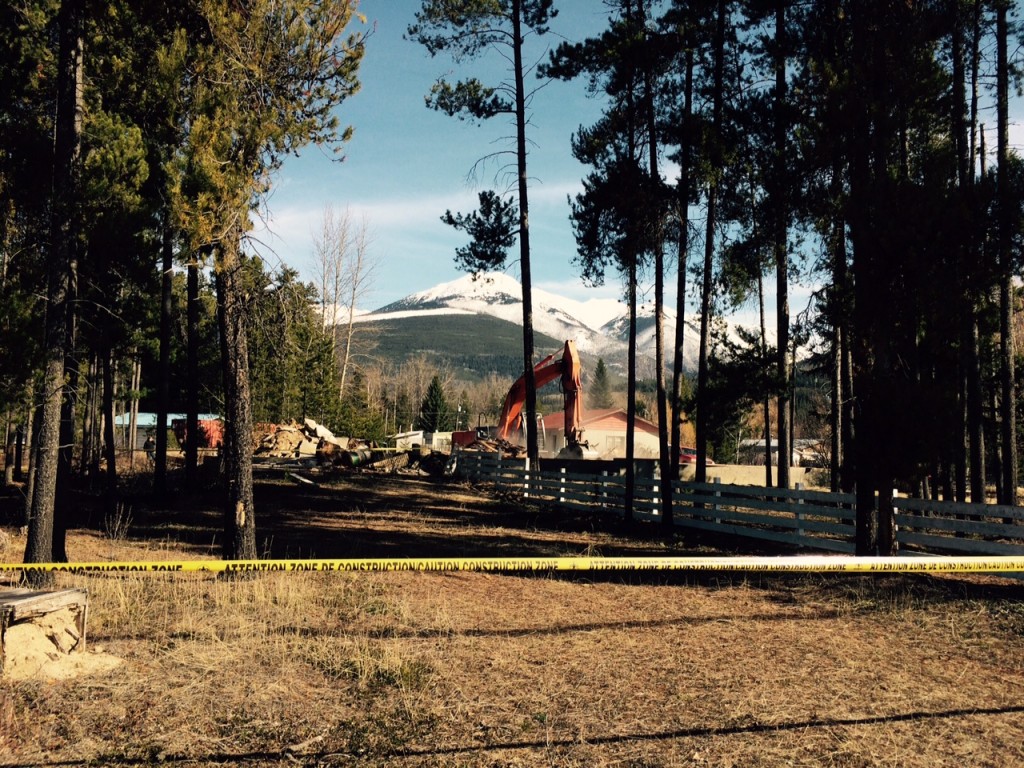 The empty orange house on 5th Avenue is no more.

The burned-out orange house which many considered an eyesore on Valemount’s main drag is now gone. Demolition equipment started knocking it in on Wednesday morning, March 6th, with trucks collecting the debris over the following days.

Colleen Osadchuk said she was sad to watch the first wall go down – the house has been there since before she moved into Valemount in the 1960’s. As they watched the demolition, her husband Junior Osadchuk, who lived in the house off and on throughout his school years and then later after he graduated, pulled nails from some of the large wood beams and boards salvaged from the garage.

"The house was repairable, if you had the money, but none of the kids did," Colleen told the Goat. "And they wouldn’t have had the authority to do it anyway."

Junior’s mother still owns the house, though she’s been in a hospital in Edmonton for the last 10 years with now-severe dementia. But with no power of attorney, no will or living will, his mother’s lawyer has argued it’s easier to wait until she dies to sort things out, says Colleen.

"We don’t think it’s better for the family, there are taxes to be paid, we can’t do anything with it," she says.

And the Village wants it gone, says Junior. So they finally had to do something.

According to a report to Council in January from the Village’s building inspector, the residence had a fire in January 2004, believed to have originated from the fireplace in the living room. The fire was put out, but the roof sustained structural damage, and the property owner did not have insurance. Colleen says the property was being rented out at the time of the first fire.

The staff report says there was another fire that summer, after which the building was barricaded with plywood sheathing to prevent further entry, but the building has continued to deteriorate. Staff recommended that Council request the property owner demolish the structure, and consider remedial action under the Community Charter if they didn’t. At the time, Council delayed a decision on the recommendation, and the issue has not come up at Council since.

One of Council’s new priorities is "Clean-up of unsightly properties".

With the building gone, the family is still unsure of what will be done with the property.

On the other side of 5th Avenue is the former school yard, which has sat empty and bordered by a chain-link fence for years. Residents have often complained the two properties were a deterrent for visitors who might be heading into the Village’s vibrant business core, not quite visible beyond. Now one of them at least is gone.