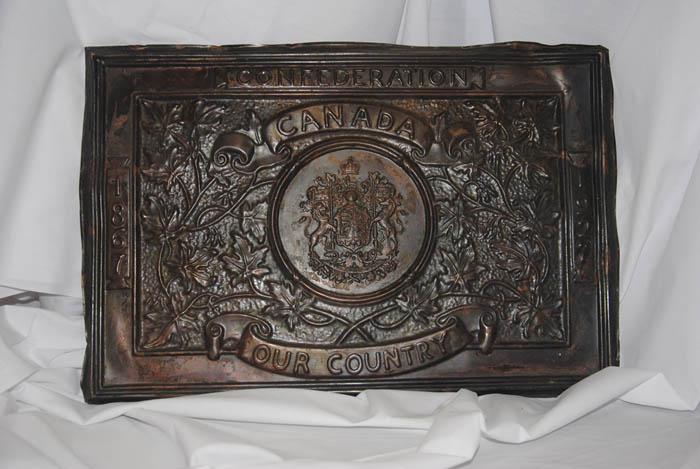 On July 1st, 1867 the British Colonies of Canada, Nova Scotia, and New Brunswick officially became the basis for what is now Canada. Upon the signing of Confederation, the new country was then divided into four provinces – Ontario, Quebec, New Brunswick and Nova Scotia. Within six years, BC and Prince Edward Island had also joined the Confederation.

In 1914, the desire for expansion into the west and easier transportation across the country was realized in the form of a Trans-Continental Rail line. 1914 also marked Canada’s entrance into fighting a war on the other side of the world. When Canada’s 50th Anniversary as a country came around, little thought was given for a celebration as all resources had been diverted to the cause of World War I.

The Diamond Jubilee, Canada’s 60th birthday was a cause for great celebration. Not only was Canada at peace, but the country was prospering. A special committee set up by the Federal Government ordered thousands of copper plaques created to celebrate the occasion. A French and English version were made and the plaques were placed in every school throughout the country. With the coming of World War II, many of these plaques were unfortunately turned in to be melted down for the war effort.

While these plaques are not incredibly rare today, it is unique to still have one from the area in which it was first hung.
This particular plaque was hanging in the South Croydon School in 1949 when Marvin Moore attended the school taught by Gladys Meyer. Unfortunately, in the 1960s, the school burned to the ground, and little was saved or recovered. In 1967, Moore went back to the original site of the school and hunted through the debris until he found the plaque. For almost 50 years, Moore took care of it, until he could find it a permanent home. This summer, Moore brought the plaque back to the Dunster Station Museum so that others could appreciate its history and share their memories. On June 1st, the Dunster Station Museum will re-open for the summer season and the Diamond Jubilee Confederation Plaque will be hanging on its walls.