The developer of a new strata complex in Valemount, which received zoning approval last week, is looking for ideas for a name.

“I am so excited,” said Shirley Sander Friday morning, as she displayed preliminary drawings for four four-plexes planned for a section of Ash Street. This first phase of the development is next to an existing apartment building known locally as the CN Apartments.

Sander is representing a numbered Alberta company, doing business under the name Mica Mountain Developments Inc, which purchased a 22-hectare vacant lot between Elm and Dogwood Streets in Valemount last spring. A housing development for up to 200 single-family homes, called “Sandy Acres,” had been planned for the site at one time, but the property has since switched hands a number of times. Sander says she is looking for the right name for the new development, but wants to come up with it fast, because she hopes to be breaking ground by March 2016.

Sander says the first phase of the housing development includes 16 strata units, four of them with three bedrooms and the rest 2-bedroom units. The front doors of each unit will face Ash Street, with a main floor garage at the back, accessible from a new alley off 13th Avenue. Bedrooms and an open concept living, dining and kitchen area will be on the second and third floors. When constructed, these will be the first townhouses in Valemount.

With the rezoning approved, Sander says they are now getting the construction drawings ready and hope to be breaking ground by March.

“We only have to sell four, and we can begin construction,” said Sander. They plan to begin marketing the strata units in the new year. “The market is so hot right now.”

She says they designed this first phase of the project for locals first, and depending on demand, they will decide how to move forward with other sections of development. She says she envisions some cul-de-sacs, a mix of single-family homes including bungalows and walk-outs and more strata developments, and some walking trails and public space. She says about 10 per cent of the total area has to be dedicated as green space.

“We’re going as green as we can afford,” says Sander, noting they are planning to install in-floor heating and electric fireplaces. She says they will be offering standard packages including five appliances to keep construction costs lower, but will also offer an upgrade package. She says the two-bedroom units have double master suites, because she thinks there is a demand for housing that two couples can split.

Sander says she will manage the first strata until the 16 units are sold and the owners install their own strata board. The strata board oversees shared areas and maintenance costs and things like snow removal and lawn maintenance.

There was only one submission to the public hearing on Dec. 8th. It was a written submission from the Valemount and District Fire and Rescue Department, noting that high density residential housing can create challenges for a volunteer fire department. Though not required, it requested the developers consider the installation of an interior fire suppression system, which can quickly reduce or eliminate the spread of a fire, should one occur.

Rezoning passed third reading after the public hearing, at the last regular council meeting of the year. It received final approval at a special Council meeting on Dec. 10th. 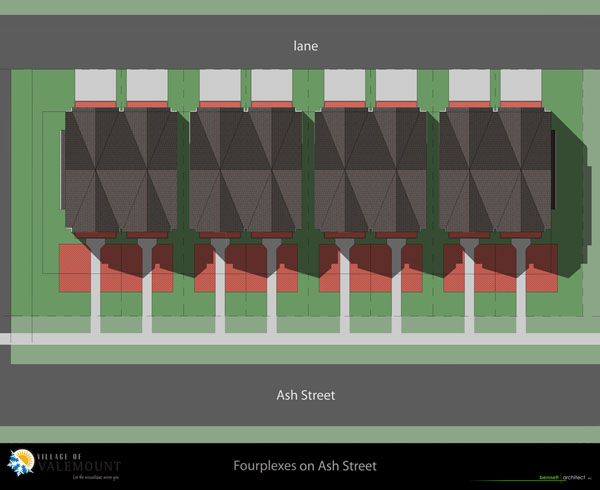