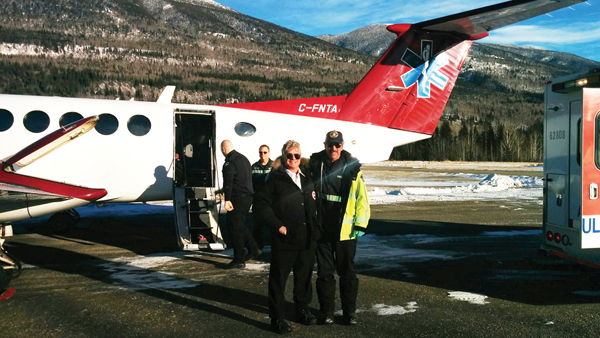 McBride just had its first air ambulance land since upgrades to the runway and communications were completed over the last few years, says Kelly Mortensen, manager of the airport. Besides being a first, the flight was noteworthy because it started in Vancouver and brought a local resident directly to McBride, says Mortensen. Pictured are Captain Cris Baldwin and Craig Arnold, local paramedic, with Northern Thunderbird Air King Air 350 in the background.

Recent upgrades to the airport include installing lights and offering fuel, says Mortensen. NavCanada has also installed a remote communications outlet which allows communications with flight information in Kamloops, which is also accessible for aircraft using the Valemount airport. Mortensen says a future goal is to get an automatic weather observation system installed, which would allow pilots to get current weather via their vfh radios from Kamloops.