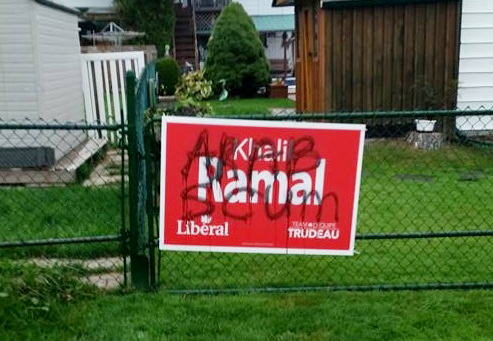 You may have heard about the recent attacks on Canadian Muslims. Police say a pregnant Muslim woman wearing a hijab was picking up her daughter from school, when two teenagers came up behind her on their bikes and tried to rip off her hijab. Their tugging caused her to fall down. In a separate incident, a Muslim woman wearing a niqab was blocked and then elbowed as she entered a Shopper’s Drug Mart with her daughters; A Muslim NDP candidate had her signs defaced with “No Muslim, no terrorism.” And a Muslim man running for the Liberal Party found two dozen election signs defaced in red ink with the words “Arab Scum,” and “Muslim Scum.”

It all comes in the wake of the Conservative Party’s election rig, one that has churned up the waters of racism in order to gain votes with their base. It’s working.

Many Canadians are worried about the “scourge” of the niqab or, let’s be honest, anything Muslim.

Aside from fear of terrorism (news flash, 94% of terrorist attacks in the U.S. are by non-Muslims), many Canadians’ convenient liberal excuse is that the head scarf equals subjugation.

But what it’s really about is the politics of difference.

When we don’t understand something it’s easy to think of it as wrong. Especially listening to political rhetoric designed to churn up our emotions and appeal to liberal ideals of women’s rights, security etc. The government still hasn’t condemned the violence against these Muslims, even though the National Council of Canadian Muslims (a Muslim civil liberties & advocacy organization) has pleaded for them to do so.

Instead of condemning these incidents and Islamophobia, Harper said in a media interview: “Look, I don’t think you can use that kind of thing [i.e. the assaults against Muslim women] to discredit legitimate political debate. Violence against women is unacceptable, which is why our government has brought forward laws to crack down on violence.”

The recent attacks on Muslims brings to mind Kristallnacht in pre-war Germany, a night where Jewish shops and synagogues were ransacked. The attacks were perpetrated by civilians and paramilitary forces. The government did nothing to stop them. It was the lead-up to a very disturbing time in our history.

But the Nazi Party did not forward their agenda against Jewish people alone. They had the support of many; anti-Semitism was rife in Europe as well as North America.

Canada even played a part. A ship full of Jewish refugees, the M.S. St. Louis, sailed to North America in 1939, its passengers seeking refugee status. No one would take them in – not the U.S., not Canada. It eventually sailed back to Germany where 250 of those Jews later died in concentration camps.

Canada has a long history of shoring up distrust of minority groups for political reasons. Remember the internment of Japanese during World War two? How about the way we tore away children from their parents and placed them in residential schools to “Kill the Indian in the Child?”

We’re faced with another refugee crisis today – one with a population many distrust, made worse by the politics of fear and hate perpetuated by our government. If the government represents the people, what does this say about us?

We desperately need to get to know each other – all religions and backgrounds – before Canada sees more violence based on hatred and fear of the unknown. I propose a new national day “Get to know a muslim day.” I think this would go far in allaying fears and misconceptions.

Talking about the Niqab and Muslims during the election period is exactly what Harper wants, however. He has a lot of stuff to deflect.

Here’s the discussion Harper’s hiding behind a head scarf: the Duffy trial; Nigel Wright; cuts to Veterans Affairs offices and pensions (In a $700,000 class action lawsuit against veterans, the Harper government argued they did not have a sacred obligation to care for veterans returning home from war); billions in subsidies to the oil industry; a divisive hotline to report “barbaric cultural practices;” a restrictive anti-spam law with huge penalties that hurts small business; Bill C-51 which invades our privacy and has been denounced by hundreds of experts; GDP growth that is the lowest in 70 years; worst job creation of any Prime Minister since 1946; decline in the employment rate; tiny growth in exports; and despite our struggling economy, this is one of the best times to be the richest 1%.

I hope we can look beyond hate and fear and base our vote on research, not hype about what one woman wears to a ceremony (should we also ban wedding veils? That’s a legal ceremony too!). We must condemn these divisive politics and reach out to Canadian Muslims. Otherwise, I am very fearful of what is to come.