The Valemount Legion, Branch 266, was filled with invited guests on Saturday, some from as far away as Newfoundland, to commemorate the 65th anniversary of the Canoe River Train Crash.

“The wreck was such a mangled mess they didn’t find my Dad’s body until spring,” recounts Glenda Cornforth, who was just 14 when she lost her dad, an engineer from Jasper on the troop train.

“There was a hospital train sent right away from Jasper, with a young Dr. Straughn and several nurses.” Dr. Straughn’s son Brent says he was only 4 years old at the time of the accident.

Cornforth says extra bandages were made up at the hospital before leaving, and when the train returned, it did not even stop in Jasper. There were so many serious injuries it went right through to Edmonton.

“Mom got a settlement of $50 per month, plus 50 cents a day for me,” says Cornforth. “She lost this compensation from CN when she remarried – and she wrote many letters to try and get compensation tied to the cost of living, which eventually did happen. We had to rent rooms to survive.”

The crash happened on November 21, 1950, when a westbound train carrying members of the 2nd Regiment, Royal Canadian Horse Artillery, on their way to the Korean War, collided with an eastbound train just east of Canoe River. Many locals assisted in the rescue effort, but 17 troops and the four engineers, two from each train, died on scene or succumbed later to their injuries.

The 17 soldiers who lost their lives are counted among the 516 Canadian soldiers who died as a result of the Korean War. 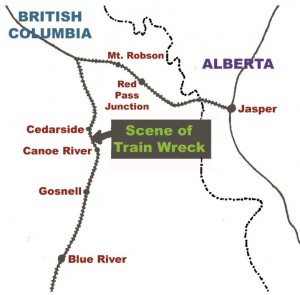 “I was only 10 months old when my Dad lost his life in the first car – he was on the Troop Car, carrying troops to the Korean War,” says Eileen Bruff. Her dad, Joseph Thistle, was 46 years old, and his death left Eileen’s mom at home in Newfoundland with three small kids. “My Mom lost the love of her life and never remarried,” said Bruff.

“The years after for Mom were much more of a tragedy,” adds her son Tony Thistle.

There were no medical supplies on board the troop train and the cars at the front, made mostly of wood, were splintered beyond recognition. Many soldiers were scalded when steam heating pipes broke in the coaches, and local witnesses and rescuers reported a cloud of steam hanging over the two engine cars that had collided.

A missing order to one of the engineers was blamed for the accident. The telegraph operator charged was let go and never served jail time.

Members and staff of the Army Cadet Corps’ Unit 2618 Rocky Mountain Rangers came from Prince George to help throughout the weekend with the ceremonies and meals, and also helped clean up the streets on Saturday morning before the parade.

“It’s good to remember the past and to bring our Cadet Corps to towns that don’t have one,” said Chief Warrant Officer Belteck.

In recent years, both the 60th anniversary of the disaster held in 2010 and the dedication of a Cenotaph Howitzer in 2013 have been accompanied by a parade through the Village and dinner at the Legion. The dedication of the Cenotaph Howitzer to the memory of the RCHA Gunners and CN trainmen who perished also coincided with the 50th anniversary of the Valemount Branch. The events have been held in September to avoid winter conditions that would make it difficult for some veterans to travel.

A memorial cairn was erected by 2RCHA in 1987, near the location of the collision, but it is not easily accessible. There is also a monument at CFB Shilo in Manitoba, from where the soldiers were deployed.