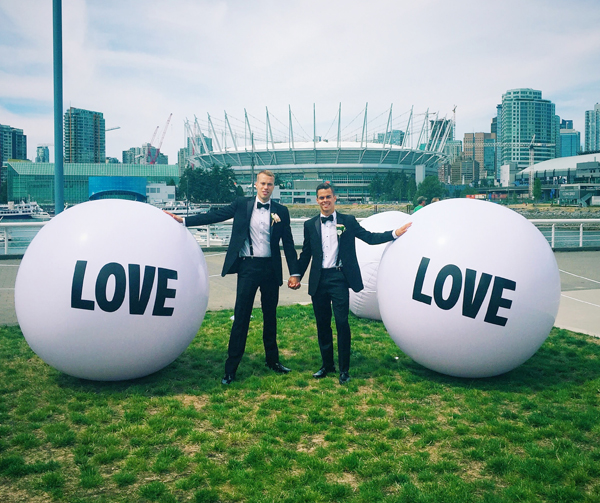 A Valemount local and his partner recently celebrated their wedding in style after winning a Vancouver radio station’s wedding contest.

Vancity Buzz called it “possibly the largest and most spectacular gay wedding in Vancouver history.” It included a performance by Vance Joy, who got the couple tickets to the Taylor Swift concert that night and mentioned them on stage.

Dakota Stone and Paul Alberts just moved down to Vancouver from Prince George in January. Dakota is an emergency medical dispatcher and paramedic and Paul is a self-employed photographer and videographer.

They started playing in an LGBT community soccer league in Vancouver and one of their teammates encouraged them to apply to this Peak radio contest, since they had recently gotten engaged.

She said “You guys should totally enter this contest, you’d absolutely win. You’re an amazing couple.”

The contest covered all wedding expenses and was held the day before the Vancouver Pride Parade.

They hummed and hawed at first about entering the contest. Dakota wasn’t sure they would win. If they did win, it would mean the wedding would have to happen in Vancouver. He wanted to have the wedding on his family farm in Valemount. The contest wedding limited the number of guests as well.

On the last day they could apply, they decided to go for it. They made an entry video explaining why they should win. 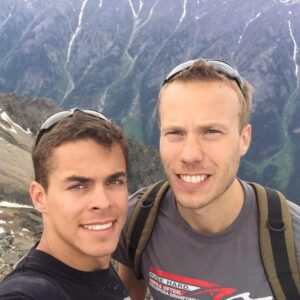 “Paul and I are pretty adventurous. Whenever we travel, whether it’s finding a hostel, we usually wait until the day of to see where we’re at. So this is another one of those decisions we’ve done together where we waited until the very last day.”

The following day, they woke up to the news that they had been shortlisted in the top three.

“When we heard our names, we said, ‘Oh my goodness. Are we doing this? I guess we’re doing this.’”

“I said to Paul, ‘I hate losing, so we have to go for it now. We’re both pretty competitive so it was all or nothing.’”

The next phase relied on public votes, and Dakota says the response from family, friends and their home communities was “absolutely incredible.” He says they had some supporters who set their alarms every hour through the night so they could vote as much as possible.

“I want to thank everyone from Valemount and area for all the love and support throughout this whole contest.”

He says winning was “surreal.”

“I was speechless, I couldn’t believe it. All our family and friends came through for us. The amount of support we got was absolutely amazing. I never expected anything like this.”

“I told Paul before were were announced the winners that even if we didn’t win, the amount of love we received during the contest was more than I could have imagined.”

They only had a week to organize the wedding, which was held in front of Science World in Vancouver. Despite the short notice, both men had many relatives show up, including faraway aunts and uncles. One of Dakota’s aunts, a person he wasn’t sure accepted his relationship, painted her nails in the rainbow colours.

“Our whole coming out has been ‘I don’t know what they’re going to think.’ In our heads we’ve always blown it up way more.”

That said, Dakota says he struggled with his sexual orientation growing up.

“It was very difficult for me coming to terms with it,” he said.

When he left Valemount he said he wasn’t sure what to do with his life. He was depressed.

When he came to Prince George and met Paul he came to terms with being gay and was much happier. He says Paul made him a better person.

His message to young people who are unsure about coming out is to reach out to someone they trust. Dakota says he reached out to Dr. Keyter and that it provided him with a lot of needed support.

“In the end it’s not a bad thing. It’s a great thing. Nobody cares anymore. It’s awesome. There’s more people that don’t care, than the people that do care. Don’t ever be afraid to come out. Once you do, you get so much love and support. You’re able to be free and not deal with the guilt and stress every day.”

His advice to parents and loved ones is to take a step back and some time to process the news if it comes as a shock.

“Don’t say something you’ll regret. Once words are said, they’re said. The person who hears that will never forget it.”

“You can tell the person, ‘I just have to process this right now,’ but don’t say something harsh. There’s no reason for it.”

He says the best part of his wedding was declaring his love for Paul.

“My vows and when he said his vows. And then being announced as husbands together.” 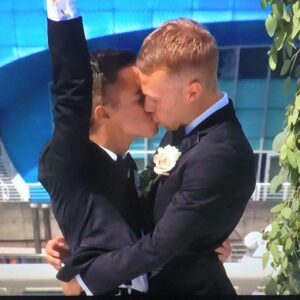 Radio listeners got to hear the wedding live on the radio. Vancouver mayor Gregor Robertson helped officiate the ceremony.

The couple will spend two nights at Sparkling Hill Resort and Spa as part of their honeymoon, another perk of the contest.

The couple still plans to have a Valemount wedding this fall – a more low-key potluck on Dakota’s family’s farm.

They plan to show the video of the Vancouver wedding for people who weren’t able to attend – and relish the memories of it for years to come. 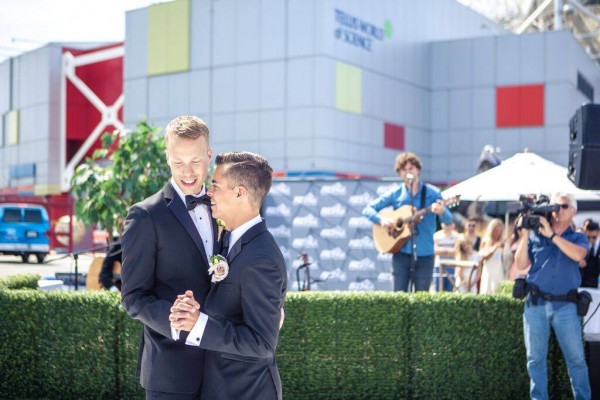