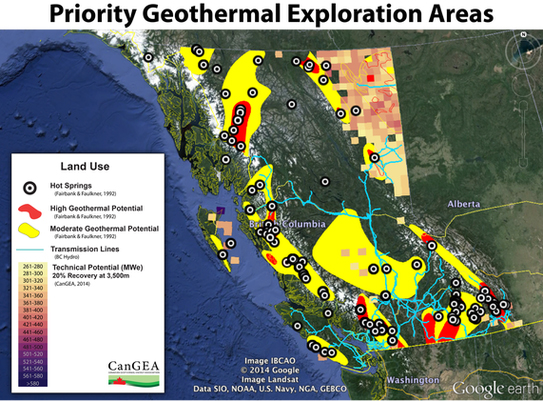 The industry association dedicated to unlocking Canada’s geothermal energy potential has released a response to a recent report by BC Hydro and Geoscience BC, questioning the lack of standards used in the report, and asking that it be retracted.

Geoscience BC is an independent, non-profit organization working to build BC’s economy by generating and sharing earth science information with everyone. On July 17th it released a study of the economic viability of selected geothermal resources in the province. The study looked at 18 locations across the province, including the Canoe Reach, just south of Valemount, chosen by Geoscience BC because of their known potential for geothermal electricity.

When the report was released, Randy Reimann, Director of Resource Planning for BC Hydro said BC Hydro was pleased to participate in the study. “It offers a good estimate of how low costs could be and the potential of the resource on what we believe are the most promising sites for geothermal development.”

Last week the Canadian Geothermal Energy Association (CanGEA) released its response to Geoscience BC’s assessment, saying it only represents analysis of a portion of BC’s geothermal potential for electricity, and has significant shortcomings which render the findings “incomplete, inaccurate and misleading.”

Alison Thompson, Chair of CanGEA, says they have asked that “BC Hydro retract the report that they sponsored and cease making any statements or decisions about the cost of geothermal power in the province until relevant, locally quoted inputs are used in an economic model.”

In a phone interview, Thompson says the request for retraction is a serious thing, but CanGEA is the only organization that has responded to the report for BC Hydro and Fortis’ joint integrated resource plan. The Village of Valemount is a member of CanGEA, and Thompson says they’ve done a scenario on Canoe Reach which dropped the estimated cost by half, just by “removing punitive assumptions” used in the Geoscience BC report. She says it is important not to have faulty information stand, and questions why other associations provided data, but CanGEA was not included. She also questions why they were asked to pay $31,000 to see a reference used in the report.

CanGEA’s response says the report provided a vast amount of useful information about certain geothermal sites in BC, which is greatly appreciated by the industry. But it found serious shortcomings in other topics in the report. One example is the assessment of the number of megawatts of geothermal potential in the province, which didn’t include several thousand megawatts available in the Hot Sedimentary Aquifer in northeastern BC. It also found the report’s calculations of Levelized Cost of Electricity to be extremely questionable because of the use of highly overestimated drilling costs, among other things. Thompson says information about the cost of drilling is widely available in Canada, and also from
CanGEA’s recent capital modelling exercise, which she says BC Hydro chose not to participate in.

CanGEA says it questions the professionalism of the geothermal consultants and the relevance of the scope of work set by both BC Hydro and Geoscience BC.
“We welcome the opportunity to participate constructively in BC Hydro’s Integrated Resource Plan consultation period, and to aide in correcting the identified shortcomings,” says Thompson.

CanGEA says geothermal has the potential to provide firm energy at a lower cost than alternatives in a manner that benefits ratepayers, taxpayers, the economy, First Nations and the environment, while having a lower carbon footprint than all other renewables and large hydro dams. The use of low-cost geothermal heat, a by-product of the power production process, also carries the potential to spur community development via entrepreneurial endeavours, according to CanGEA.