Laine Smith was teaching a class of paramedics-in-training about discrimination. It was a brief part of a four-day orientation that dealt with everything from CPR to the proper way to lift a stretcher. Smith explained that there are 13 different kinds of illegal discrimination, and the class had a brief discussion about why discrimination is bad.

Then this reporter, who was in the class as a trainee, asked if it was discriminatory to use the term “Welfare Wednesday.” Some paramedics use it to refer to the time of the month when overdoses spike in the days after people on income and disability assistance receive their cheques. (A 2014 study of a supervised injection facility found that there were twice as many overdoses during three days each month, starting with the day people got their cheques.)

Smith said the term wasn’t a problem. “It’s a fact,” he said, adding that it would only be an issue if someone was treated differently. “Why is that discrimination?”

A spokesperson for the Vancouver Police Department agreed.

“It’s like saying Christmas is on a Tuesday,” said Sergeant Randy Fincham. “We don’t read into it anymore than sharing which day of the week the ministry would issue cheques.”

“It’s discriminatory,” said Donna Perkins, who owns the Beanery 2 Bistro in McBride, and relied on income assistance cheques for years as a single mom raising three kids. When she hears someone use the term “Welfare Wednesday” she says she feels someone is really saying “‘That’s the day the second class citizens get their alcohol.‘The party’s on ‘til the money’s gone.’”

She says you’re tarred with the same brush whether you’re part of that lifestyle or not.

But people who do have that “lifestyle,” who spend assistance dollars getting drunk or high, wrongfully face a double standard, argued Stephen Portman, the interim-executive director of the Together Against Poverty Society.

“People who have jobs go out and get wasted on Friday, on payday,” Portman said. “But we don’t have a derogatory term that’s accepted in the common lexicon for drunk middle class or wealthy people.”

“There’s an idea that people who are poor ought to behave better than the rest of us,” said Dr. Margot Young, a professor at the Allard School of Law at the University of British Columbia, where she researches Social Welfare Law. “It’s ascribing to people on welfare some kind of negative behavior we assume the rest of us don’t exhibit.”

Talking about the monthly spree that is “Welfare Wednesday” without talking about the the hunger and struggle that both precedes and follows it is misleading, said Dr. Shauna Butterwick, an assistant professor the University of British Columbia who studies social justice.

“It might be a fact. But the most important question is to ask why,” Butterwick said. “It hides more than it reveals,” she said of the term. “It focuses on a very particular day and moment of the whole difficulties of surviving on social assistance.”

An adult on assistance can get up to $610 from the province each month. That hasn’t risen since 2007. The Ministry of Social Development and Social Innovation cuts the cheques, and it simply uses the term “cheque issue day.”

In the end, very few people on assistance are overdosing on the days following their cheques or any other day. BC paramedics administered Naloxone, the drug used to treat people who overdose on opioids like heroin, 2,011 times in 2013, according to the BC Centre for Disease Control. There are almost 180,000 employment and assistance clients in BC. And those 2,011 overdoses are among all British Columbians, not only those on assistance.

After publishing this story, the Goat received a letter from BC Emergency Health Services (see below). 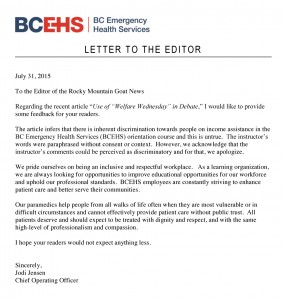