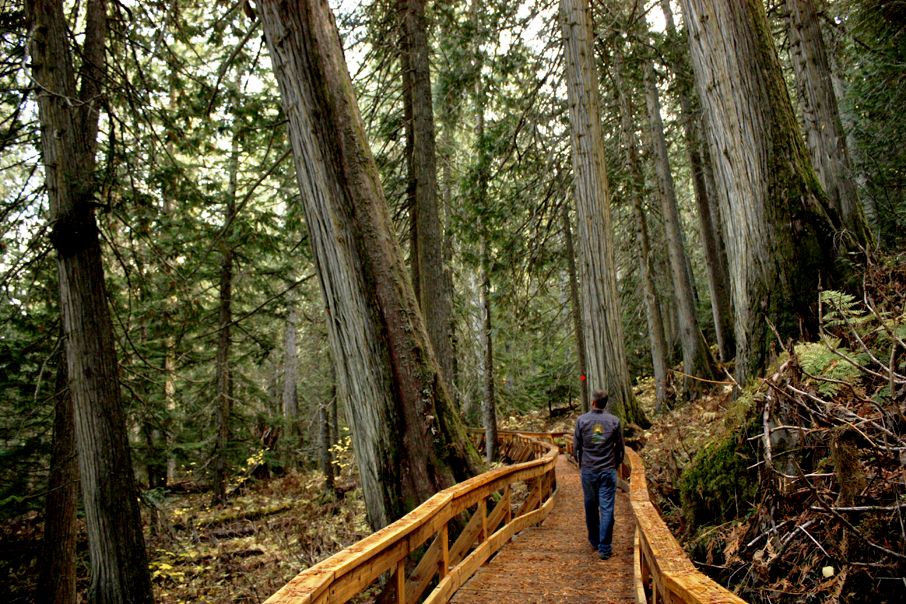 The province has just announced a new partnership to work to protect the Ancient Forest, a unique temperate rainforest between McBride and Prince George. The province, the Lheidli T’enneh First Nation and the Caledonia Ramblers Hiking Society announced the partnership on Friday to work to designate the forest as a protected area.

The province says it is calling for public input into the planning process, and to help determine the forest boundaries and the legal designation of the protected area. A high level of protection by the province or federal government is a requirement to apply for UNESCO World Heritage Site status, as researchers from UNBC argue the forest deserves.

Called Chun toh whud u jud by the Lheidli T’enneh, whose traditional territory it is in, the Ancient Forest covers more than 10,000 hectares of largely unlogged temperate rainforest. It contains stands of giant red cedars, some well over 1,000 years old, as well as rare plants and lichens.

“Our roots run deep in the Ancient Forest,” said Dominic Frederick, Chief of the Lheidli T’enneh, in a news release. “We look forward to working with the Province to help protect the natural splendor of the area and to continue to celebrate and honour an important part of our cultural heritage.”

“The forest is a unique and significant ecological feature of the North,” said Shirley Bond, Minister of Jobs, Tourism and Skills Training, who made the announcement for Steve Thomson, Minister of Forests, Lands and Natural Resource Operations. “Anyone who has seen the ancient cedars can’t help but be overwhelmed with their majesty and beauty.”

“The protected area designation will ensure that this unique area will be excluded from timber harvesting and other commercial activity, which helps preserve plant ecosystems, wildlife habitat and cultural values,” said Thomson.

The Ancient Forest has three kilometres of trails, including a 500-metre wheelchair-accessible boardwalk, built and maintained through a partnership between the Province’s Rec Sites and Trails division and the Caledonia Ramblers Hiking Society. Nowell Senior, president of the society, says they are pleased with the announcement and happy to be working with partners to help protect and this unique inland temperate rainforest, “one that future generations deserve an opportunity to appreciate and enjoy.”

A recently released research paper by Darwyn Coxson and David Donnell of UNBC and Trevor Goward of UBC says ancient cedar stands within BC’s inland rainforest are unique not only in BC but globally. The size and age of western red cedars, some measuring up to 16 meters in circumference, so far from the ocean is remarkable in itself, and the stands in the upper Fraser valley support a variety of canopy lichens, including some that appear to be unique to the area.

The paper says inland rainforests have been recently identified in other parts of the world, but only in BC are large portions of them still intact. Because of this, the authors argue the stands could and should be designated as a UNESCO World Heritage Site. They say the designation for other stands like the Gondwana Rainforests in Australia has been a turning point in recognizing the scientific value of these stands, but it has also supported the economic diversification of these regions. They believe the same potential exists in the upper Fraser River watershed.

“This step of the consultation process is one [the provincial government] has to do, both consulting with the public and meeting their duties to consult with First Nations,” Coxson told the Goat this week. “That reflects due process.”

“Most UNESCO sites are either national or provincial parks in their host countries.” Coxson says this process will help determine what level of protection the Ancient Forest will receive.

“I’ve not run into anybody that says it’s a bad idea. There are some who have reservations about larger issues of land management in BC, but the specifics of this site – there seems to be pretty much consensus around the table.”

The Regional District of Fraser-Fort George offered a letter of support last fall, after Coxson and David King, a director of the Caledonia Ramblers, made a presentation to the board about the project.

“The passion and commitment of people in communities across the region in building and supporting the Ancient Forest Trail site is a real grass roots success story,” Coxson told the Goat last fall.

Over $340,000 worth of materials, in kind contributions and volunteer labour were donated to Ancient Forest Trail projects by 80 sponsors and supporters between 2005 and 2014, including the McBride Community Forest Corporation other McBride businesses. Other research by David Connell shows that visits to the Ancient Forest have generated $250,000 in spinoffs for the region, which is both significant and sustainable.

The province says public consultation will begin in the summer with significant public involvement in the fall.