Nicki Cambridge is standing next to the Canoe River at high water. The muddy stream laps against the bank. The boat launch she and her friends have chosen – an opening in the trees – descends steeply. There’s a risk the river might steal away the board before the paddler can jump on.

On the ankle of her prosthetic leg is an orange water wing – the kind you see kids wearing on their arms at outdoor pools. She and friend Donalda laugh about whether the orange band will do anything if she loses the prosthetic in the water. If it gets wet, it could pop the suction keeping it on her body.

They recall that time in South America when they did some huge waterslides. At the bottom pool, they heard a man shrieking and pointing. Nicki hadn’t noticed right away that her prosthetic had come off. It was floating in the pool – what looked like a real leg, to this man’s dismay.

Nicki watches as her friend Graham steps onto his paddle board; it sags with his weight; he flails his arms and then he falls into the cold river beside it.

Nicki stands, hands on her hips, her sleeveless top revealing a tattoo on her right shoulder. Her lime green sunglasses pop against her blond hair.

She grabs her paddle, tucks it under one arm and manoeuvers down the bank, crawling onto the board as it wavers in the water.

Soon enough, she is standing on the board, and, from a distance, you’d never know one leg wasn’t real.

10 years ago, when she was in Gr. 12, she broke 37 bones in her body in a car accident. Eight months later – Christmastime 2005 – the doctors told her they would have to amputate her left leg. Distraught, she told them she’d rather die.

She contracted gangrene and they gave her three days to live. She got emergency surgery to save her life.

Afterwards, as she lay in her hospital bed, semi-delirious from the morphine drip, she grabbed a pen and paper and started writing. She wrote down all the things she wanted to live for.

“I thought if this has happened, I need something to live for. It was a pretty low point.” 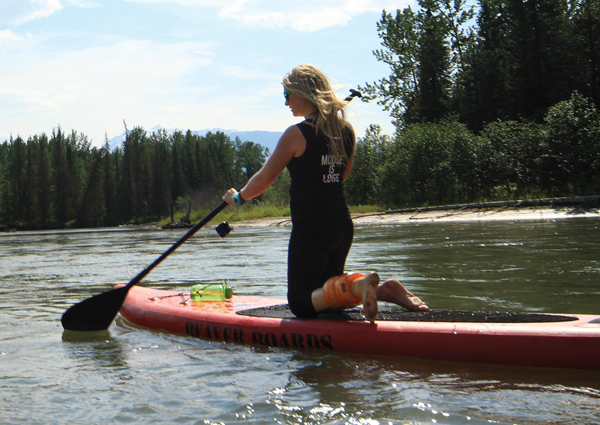 The list she drew up – 50 items – has been tweaked in the years since. But it has spurred her to many daring adventures.

Soon after her recovery, she moved to Spain and learned Spanish.

After graduating from university, she travelled through Central and South America and became the first leg amputee to complete the Inca Trail in Peru – a multi-day hike that gains 3600m of elevation. Her Dad and cousin hiked the trail with her.

“I didn’t think physically I’d be able to do it,” she said of her initial thoughts, but after talks with her family she decided that now would be the time to try.

The hike was tough, and many able-bodied people had a hard time.

“There were people having breakdowns all along the trail. People were surprised but also very encouraging. And I think at the same time lots of people were like, ‘if she’s doing this, then I have to do this.’ I like to think that I inspired some people along the way.”

On her list are items such as: visit 50 countries; step foot on every continent; adopt a child from a 3rd world nation. Some of the items are small – others huge. She keeps the original hand-written list in her wooden hope chest in her childhood bedroom in Jasper.

She tries to keep it in mind, but she says she tries not to miss new opportunities in living solely by her bucket list. She only looks at it once a year – every July 1st.

As they follow the river’s turns, the paddle boarders soon catch a glimpse of Canoe Mountain rising above the trees like Mt. Kilimanjaro over the Serengeti. There’s no civilization within view – only the wavering ash trees, flood plain grasses and deer tracks on the shore.

Nicki says she tries to do an hour of biking, paddle boarding or kayaking every day to appreciate living in such a beautiful place. Based in Jasper, she usually comes to Valemount once a week. She says most of her friends are active and inspire her to do healthy activities.

“A lot of my friends have really, really helped me. Donalda is probably the reason I paddleboard. It’s to spend time with her and do positive activities with friends.”

It’s clear by their stiff upright posture, that paddle boarding takes balance and practice. How has Nicki adapted to this sport?

“I have to adjust to everything. But I just have the attitude that I can do anything that anyone else can do. I try my hardest not to let it hold me back.”

She admits to having a lot of pain while trying to paddle board or do other sports.

“I just hope that once I get good at them that maybe I’ll learn how to modify everything.”

Along one of the riverbanks, Donalda stops to do some yoga poses for the camera. Yoga is something Nicki does often with Donalda.

“I obviously can’t do a lot of the positions, so it can be discouraging,” she says. “But it’s about finding something that works for you.”

Donalda says Nicki is often the instigator for adventures – zip lining over the rainforest, paragliding, surfing and more. That includes the time they travelled together in South America.

“Kat and I are leisurely travellers. When Nicki got there, it was full throttle,” Donalda says, laughing.

After Donalda introduced Nicki to paddle boarding, Nicki tried it out and then decided to buy a paddle board.

“It was something she wasn’t sure she’d be able to do. But she got out there and was rocking it – on a super windy day,” Donalda says.

“Nicki just rocks out all the time,” she says. “It’s super inspiring to have a friend that doesn’t let things get her down. I think because she’s been through a lot, it’s encouraged her zest for life – she wants to try everything and go everywhere.”

Nicki says her disability has also given her a direction in life. She just graduated from university as a Rehabilitation Practitioner.

She says she’s going to spend the rest of her life helping other people with both the physical and mental rehabilitation that takes place after an injury.

“If what I went through could help someone else, then it might be worth it.”