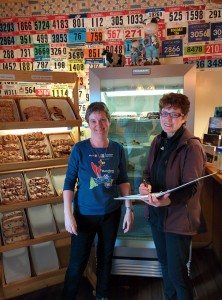 Councillors, government staff, volunteers from the Valemount and Area Chamber of Commerce and other organizations reached out to the business community in Valemount this spring in the Village’s first business walk. What they found was pleasantly surprising to some.

A business walk program gives an opportunity for governments to connect face to face with local business owners and managers in an informal atmosphere, and to listen and identify common themes. It’s also an opportunity to let businesses know about local, regional and provincial services available to them.

“It really wasn’t quite the doom and gloom picture that sometimes people say is out there, it’s actually quite positive,” said Councillor Sandy Salt. She said she went into the walk feeling apprehensive but came out of it feeling positive, with a lot of good feedback from the walk.
“We’ve got some issues, but we also have stories of success,” said Councillor Owen Torgerson.

The business walk started on April 16th, and continued on a couple days in May, in order to reach as many businesses as possible. Members of the walk covered Main Street, 5th Avenue and the highway corridor between 5th and 9th Avenues, and reached 40 businesses. They went in small groups, with a list of just a few questions to gauge the state of local businesses today and to see what can be done to help.

The focus of the questions was on challenges and what can be done to help businesses thrive. The greatest challenges listed were seasonality (at 25 per cent) and staff (at 22.5 per cent). Signage, customers, shopping locally, cash-flow and capacity building tied for third (all at 7.5 per cent), followed by rent (5 per cent). Costs, taxes, zoning were also listed, and one respondent said there was no single greatest challenge.

The report from the business walk was release on Council’s agenda for the May 26th meeting. During the meeting, Torgerson said some of the comments received suggested the Village re-establish commercial signage at both ends of the village, similar to McBride and Avola. He said the Village can’t help easily and quickly with seasonality or staffing issues, but commercial signage along the highway is something the Village could do in relatively quick time frame.

“Because the questions asked were about the challenges, there wasn’t an opportunity to collect positive comments,” said Anne Yanciw, Valemount’s chief administrative officer, “but it was a very encouraging.”

Myles Bruns, Regional Manager of Economic Development for the Ministry of Jobs, Tourism and Skills Training, said the organization by the Village and the support from the Chamber, Council and the other partners in the walk was terrific.

“I was very encouraged by the attitude of the businesses we visited, and very pleased to have had the support of the other partners in the walk,” said Bruns. 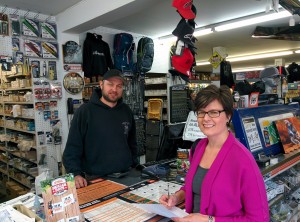