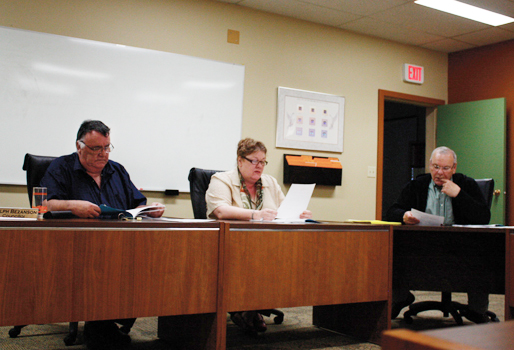 In a flurry of meetings last week, the Village of McBride adopted a budget, appointed a new Chief Administrative Officer, and set a tentative date for a special election to fill former-Councillor Bob Callaghan’s empty seat.

Municipal spending is slated to drop more than twenty percent this year, from $1.8 million to $1.4 million. Among other things, the reduction is thanks to postponing road work and an ebb in grant money. Thus far, there isn’t a big project slated for 2015—like the sanitation lagoon, or the purchase of the forestry building—as there had been in many recent years.

Legal fees were one notable budgetary increase. They’re estimated to clock in at $55,000, up from $15,000 last year. The rise is at least partly because of the village’s court case with former-public works foreman John Aitken, who alleged he was fired improperly. The results of the case, which was settled out of court, are sealed. Aitken no longer works for the Village.

In other news, Kelley Williams is McBride’s new top administrator. She replaced Bob Lafleur, who held the job in the interim while the village found a replacement for Eliana Clements, who resigned earlier this year. Williams was previously the executive director of the Robson Valley Support Society.

Lastly, the special election to elect former-Councillor Callaghan’s replacement is scheduled for July 18th, with the nomination period running from June 2nd to June 12th. It’s expected to cost $7,000; the full election last fall cost only slightly more, at $9,650.