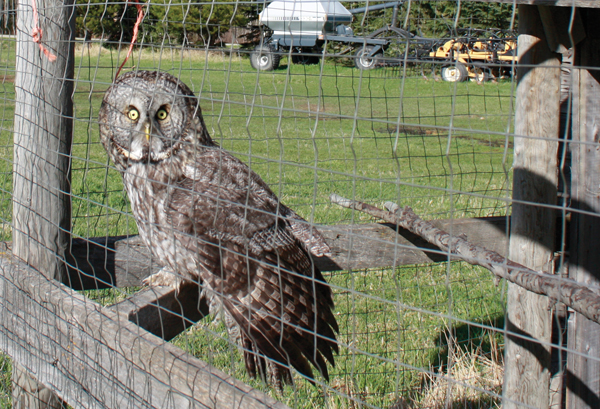 More than half a dozen Great Grey Owls arrived at the Orphaned Wildlife Rehabilitation Society over the past few months, far more than the one or two the Society usually treats. They were starving, hit by cars, barely alive.

In other words, Great Greys are thriving.

The birds that have ended up in rehabilitation are mostly yearlings, and experts speculate that the fact that they’ve lived this long is an unexpected triumph. Out of a litter of five Great Grey owlets, usually only one or two survive the first year. After that first year the parents boot them out to make room for their newborn siblings.

“Our theory is that last year’s babies are just being really successful,” said Martina Versteeg, who cares for birds at the Society. “And they survived their first year and the parents are saying now it’s time to get out of my neighborhood.”

One of those yearlings, named Oscar, got hit by a car, and he’s now recuperating in McBride. Oscar’s attendant, who’d never seen a Great Grey around before seeing several in recent months, declined to be identified because he doesn’t want people coming by and stressing out the young raptor.

Great Grey Owls migrate in a circuit from north to south every few years, following specific species of small rodents that make up the vast majority of their diets. That species varies depending on where they live—around California, for instance, they eat lots of gophers, while in Manitoba they specialize in meadow voles, explained Dr. James Duncan, director of the wildlife branch of Manitoba Conservation and Water Stewardship. The local Great Grey’s are so particular about meadow voles that they won’t breed in years when they don’t get to eat as many as they’re inclined to. They’ll just eat other rodents in the meanwhile to get by.

“They’re very picky,” Duncan said. “When the meadow voles drop, it’s time to get out of Dodge.”

That pickiness means their numbers ebb and flow along with that of their rodent prey, which means that adolescent birds are getting hit by cars around McBride because somewhere in British Columbia’s boreal forests there’s a bonanza of a certain type of rodent.

If you’d like to spot a Great Gray Owl, Dr. Duncan said they generally hunt at dawn and dusk. He also suggested that people can protect Great Grays and other wildlife by contributing to conservation groups, and, if they own land, by keeping a portion of it wild.