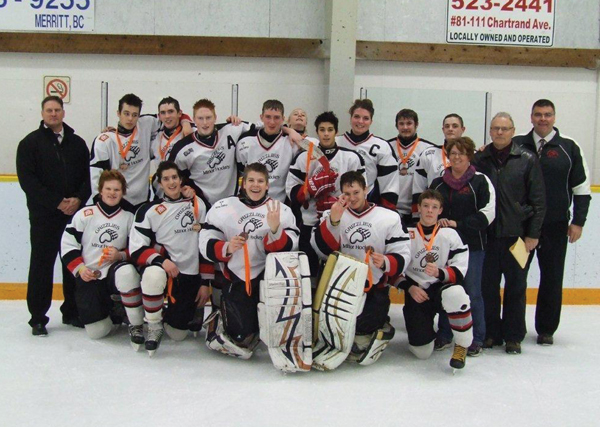 The McBride Grizzlies Midget hockey team travelled to Logan Lake for an 8 team tournament last weekend. In the first game Friday night, Grizzlies played the Merritt Centennials. Grizzlies came out fast and skated to a 7 – 0 win. Tristan Quam got the shut out in goal for the Grizzlies. Darian Griffin and Bryden Basran led the way with 2 goals each. Brett Jones, Dylan Vizza and Dawson Drader rounded out the scoring. Juliana Vizza notched 2 assists with Bobby Brawn and Shaelyn Braaten with 1 helper also.

Game 2 saw the Grizzlies take on the Vancouver Thunderbirds. The Thunderbirds took a 2 – 0 lead into the 2nd period until Grizzlies forward Hunter Friesen finally getting the Grizzlies on the scoreboard half way thru the 2nd . The Grizzlies came out skating in the 3rd with Basran leading the way with 2 goals. Dylan Vizza contributed with 1 goal and 1 assist, Juliana Vizza also notched an assist. Grizzlies’ goal tender Robert Knezacek was in goal for the win.

Game 3 on Saturday evening saw the Grizzlies play their toughest opponent of the year thus far, the Surrey Thunder. The Thunder started quick establishing a 2 – 0 lead which lasted until the midway point of the second period when Basran finally scored for the Grizzlies assisted by Rylan Moore and Griffin. Four minutes later Keith Shawara got the Grizzlies 2nd goal assisted by Noah Janecke. Despite a tremendous effort the Grizzlies suffered their first regulation loss of the year, going down to defeat 4 – 2. Grizzlies goaltender Quam took the loss.

With the disappointing loss the Grizzlies were relegated to the Bronze medal game on Sunday against the Surrey Avalanche. Once again a lower mainland team proved to be all the Grizzlies could handle, in the back and forth game which saw the lead change hands numerous times. Dylan Vizza led the way with 2 goals and 1 assist with Shawara scoring 1 goal and adding 2 helpers (2 a). Juliana Vizza contributed with 1 goal which was assisted by Janecke. At the end of regulation time the score was tied at 4 which led to a 5 minute 4 on 4 sudden death overtime period. The very exciting game was decided at 3:59 mark of overtime when Grizzlies forward Dylan Vizza launched a slap shot from the Avalanches blue line beating the goalie blocker side. Grizzlies goaltender Knezacek had one of his strongest games of the year and was named game MVP for the Grizzlies.

With the 5 – 4 victory the Grizzlies sport an impressive 11 (W) – 2 (T) -1 (OTL) – 1 (L) record so far this season. Coaches Gerry Porrier, Brian Shawara and Brady Knezacek were proud of their players who battled the flu bug over the weekend but still managed to play some good hockey. The coaches would like to thank Grizzlies Manager, Kristine Drader, for finding us competitive tournaments to play in. Next tournament action will be at their home tournament January 24 – 25th.