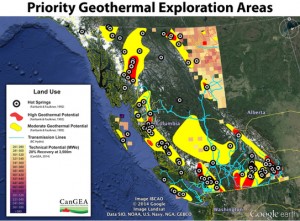 Got a business idea that some extra heat could help with? A trade mission to Klamath Falls, Oregon is showing people the potential for the direct-use of geothermal heat that can be used in small and large scale businesses. And a map of geothermal potential in BC shows we can do it here in the Robson Valley.

Silvio Gislimberti, Valemount’s Economic Development Officer, took part in the trade mission in early October. He says the situation is a little different for Klamath Falls than Valemount because they are situated on an old volcanic crater, and near-boiling water is accessible at depths as shallow as 100 meters. It is easy to find in Klamath Falls, and we still have to find it here in Valemount, and it will likely be deeper. Still, Gislimberti says he is excited about what he learned on the mission. He can’t comment any further yet, until he makes his presentation to Council at the Nov. 25th meeting.

The Canadian Geothermal Energy Association organized the trade mission to gave Canadians a chance to see many uses of the heat from geothermal, like a fish farm, a brewery and a tree nursery. The association is trying to show Canadians that we can do this too, and is posting information and short videos of the trip on Twitter and YouTube, including one short video starring Gislimberti, in front of a tree nursery.

“We can do this, Canada,” says Alison Thompson, Chair of CanGEA. Thompson says direct-use of geothermal is a different animal than getting power from geothermal, though it is from the same source – heat below the surface of the earth.

“It flies a bit below the radar in that it is not regulated to the same extent the Geothermal Resource Act does for power projects, and that is a real opportunity,” says Thompson. It’s not cutting corners, it’s done to this level all over the world, in 78 countries, but you don’t need permits, she says.

“What you need instead is entrepreneurial spirit, and a little bit of data.” Thompson says regular, average people with a good idea are making a lot of money, because they can recognize that geothermal heat is a resource. She says that recognition is lacking right now in Canada; even though Canadians will pay money to use sit in a hot spring, we don’t usually recognize that as a resource that can be used in other ways.

“The maps are a great impetus for people to understand they have a great resource beneath their feet,” Thompson says.

The maps of BC and Alberta, available on CanGEA’s website, combine historical ground-level research with actual drill data, primarily from the oil and gas industry. Only about 23 per cent of the BC is mapped with the drilled data, because that is all that is available, and most of that is outside the spots already identified as having high geothermal potential. In BC, the map shows moderate and high geothermal potential areas in yellow and red, and the entire Rocky Mountain Trench has moderate or higher potential. Little of it has been mapped with drill data, but Thompson says the existence of over 100 hot springs in the province are clear evidence of potential, and “hot springs mean resource.” Her recommendation: don’t wait on more maps; go find it, because the heat is there.

“We want people to start thinking about alligators and caviar and shrimp, not just greenhouses,” says Thompson.

You don’t need to go nearly as deep to find heat for direct-use as you do for electricity, but the maps show there is massive potential for electricity as well. Thompson says even the 23 per cent of BC that is mapped with drill data contains the potential to generate thousands of megawatts of electricity.

“These are not extrapolations or hypothetical numbers, these are confirmed data points,” says Thompson. It is a resource that has already been discovered – and discarded – by the oil and gas industry, because it is not what they were looking for, she says.

Thompson says a lot of the available information is just not being absorbed, and not just by the public, but by government as well. She says BC Hydro has been offered the opportunity to review the maps, and CanGEA is speaking with BC Hydro more regularly now as a result of their intervention in the review of the Site C dam. But she says BC Hydro hasn’t reviewed the maps, and has not come to the table to discuss geothermal potential.

“That is not in the public good; we need to be making informed decisions,” says Thompson. She says it is disappointing that there has been no commitment or confirmation from BC Hydro to look further at geothermal, though it may come. She says right now, the issue seems to be a “hot potato” between the Ministry of Energy, the Ministry of Natural Gas Development and BC Hydro, all three of which are involved in the regulation of the geothermal industry for electricity.

“Having three points of contact without anyone being the lead continues to be an unnecessary roadblock,” says Thompson. She said one of BC Hydro’s responses during the Site C panel review was to say they weren’t mandated to look at geothermal. But she says public interest is growing, and the public looks to the government to accept responsibility and accountability, not to shrug it off onto another ministry’s portfolio.