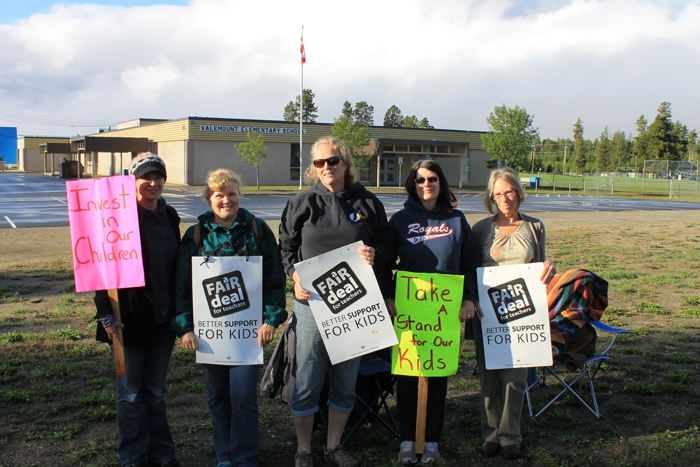 The government has so far refused the teachers’ union’s offer of binding arbitration, but teachers are voting this week to stop strike action if the government agrees. Local teachers will be hosting two public information sessions this week, and welcome anyone with questions.

Jennifer L’Arrivee, President of the McBride-Valemount Teachers Association, says teachers in the Robson Valley met on Friday in Dunster to listen to a presentation from union president Jim Iker and to discuss the union’s offer to the government. She says the union wants the government to drop the E80 clause and agree to binding arbitration. Teachers will vote on Wednesday to stop picket lines and get back to the classroom while arbitration continues, if the government agrees.

E80 is a proposal in the Employers’ Association’s framework for settlement that deals with learning and working conditions in the classroom. Jim Iker, President of the BC Teachers Federation, calls E80 the BC Liberal’s attempt to negotiate out of two past Supreme Court losses and any future decisions.

“Teachers will never bargain away our charter rights or a potential award from the courts before it even happens,” said Iker at a news conference Monday morning.

L’Arrivee thinks it is likely the teachers will vote in favor of ending the picket lines, because the majority of them want to be back in school. She says if the government had agreed to binding arbitration over the weekend, the union members would already have had a vote and would likely have been back in class by Wednesday. As it stands, the vote numbers won’t be available until late Wednesday night, and L’Arrivee says it will likely take a day or two to get things organized before classes can start.

Things are day-by-day right now, says L’Arrivee, but Wednesday evening at 6:00 pm the teachers will be hosting a public information session at the Community Centre in Valemount, and another in the Elk’s Hall in McBride at 6:00 pm on Thursday.

“We have a bunch of information and facts about what is going on, because we know people are interested.” L’Arrivee says the first part of the meetings will be presentation format, and then time for open questions. She says people are also welcome to stop and talk to teachers on the picket lines if they have questions, or can’t make the meetings.

On Saturday, Minister of Education Peter Fassbender announced he rejected the call from BCTF for binding arbitration, saying the offer was “another empty effort to give parents and teachers a false hope that there is a simple way to resolve the dispute.” Fassbender said the union’s conditions would tilt the process in favour of the BCTF, and the dispute needs to be settled at the bargaining table. He says the union leadership is trying to avoid having a tough conversation with the members about what is realistic and achievable, and the union needs to “get into the affordability zone on wages and benefits so we can get to work on negotiating class size and composition – which both sides agree is the most important issue.” Fassbender again asked the teachers to lift their pickets while the parties work towards mediation.

If the government doesn’t accept the union’s offer, L’Arrivee says the teachers will remain on strike with their picket lines intact.

“Parents, general public, make sure you are writing your MLAs, trustees, superintendents, saying you want school back in, because it has to come from the general public too,” says L’Arrivee.