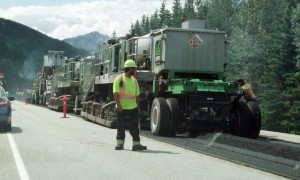 Three projects on Highway 16 through the Robson Valley will receive a total of $9.1 million of provincial funding this summer – rehabilitation of the West Twin Bridge, a new message board at Tete Jaune, and resurfacing between Red Pass and the Alberta border.

The government says rehabilitation work is underway on the West Twin Bridge, 29 kilometers west of McBride. The $4.1 million contract was awarded to Forbes Industrial Contractors of Prince George. Rehabilitation of the west end of the bridge will include a new pier, new bridge span, rock excavation and improved surface drainage, which will increase the stability of the bank and bridge foundation. With increased growth of commercial, recreational and general purpose traffic along this corridor, this work will improve the capacity and safety of the bridge.

A $400,000 contract will go toward installing an overhead changeable message board at Tête Jaune for travellers on Highway 16 westbound and Highway 5 southbound. The government says the message board will provide information about current road conditions on Highway 16. The work will be done by the local maintenance contractor and Westcana, the Ministry of Transportation and Infrastructure’s electrical contractor.

Resurfacing work is set to begin in early July on Highway 16 between Red Pass and the Alberta border. A $4.6 million contract for the project was awarded to ARC Asphalt Recycling of Kamloops. The project will start near Red Pass, 32 kilometres east of the Tête Jaune Junction, and will resurface 45 kilometres to the Alberta border. The government says the work will further enhance the resurfacing done last year, from the junction of Highway 5 and Highway 16 (Tête Jaune) at Blackman Road, ending at Red Pass Pit Road, and will help extend the life of the highway surface, improve ride comfort and provide safer driving conditions for the public.

“These projects will continue our ongoing investment in the Robson Valley and beyond,” said Prince George-Valemount MLA Shirley Bond in a release last week. “Strengthening our roads is critical to maintaining their long-term use. Highway 16 is an important corridor and all of this work will improve traffic safety and provide safer driving conditions for residents, tourists, business and commercial users.”