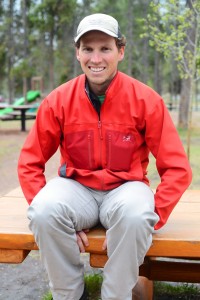 Etienne Cardinal is looking at a photo of a can of bear spray. The aluminum canister, disgorged of its peppery contents, has been twisted and torn apart, its cap having come off and its outer casing a fan of shredded metal.

Two days earlier, the 32-year-old was carrying the bear spray on his back as he rode his mountain bike down the trail local Jasper bikers know as Water Tower, above Cottonwood Slough. It was nearly 9 p.m., Cardinal was nearing the end of a long ride, and he was thinking about what he was going to make for dinner.

The next thing he knew, he heard a terrifying roar.

“I didn’t see it, I heard it roaring at me,” Cardinal said. “I think it was on the other side of some trees.”

“It,” was a massive grizzly bear. In the next ten seconds, the bear would push Cardinal off his bike, swipe at him with his paws and bite down into his back—right where the can of bear spray was secured.

“It was right there, it was standing up,” he said. “I’m looking in its eyes — I know you’re not supposed to — and yelling ‘hey hey hey!”

The bear was less than four feet away — close enough that Cardinal can remember its head, tilted and shaking as the grizzly displayed its aggression. Everything happened so quickly that Cardinal has trouble recalling the play-by-play details.

“In my mind I’m not sure if I’m still screaming but at that point I’m thinking ‘there’s a grizzly bear coming onto me,’” he said.

Attempting to jump behind a tree, Cardinal ducked down, covering his head with his arms. He knew the bear was right on top of him. But suddenly, the chaos stopped.

When he looked up, Cardinal said he saw the bear retreating. “He was running up the hill,” he said.

Before he could begin to wonder why the bear had backed off, a cloud of oily gas stung his eyes and face. He realized that his defensive spray had been discharged. Upon investigation, the bear likely bit into it, bursting the gas into its mouth.

In the meantime, Cardinal was also getting sprayed. He couldn’t breathe.

“I looked back and then I got this draft,” he said, imitating a choking action.

In his panic to retrieve his cell phone and call for help, Cardinal swung his backpack around to his chest. But because the aerosol had been released from the can and only liquid remained, the burning fluid spilled down his arms and chest.

“My whole body was burning,” he said. “At that point I couldn’t move, I couldn’t see anything.”

Cardinal is a resource management officer for Parks Canada. Fortunately, the last person he made contact with was a fellow duty officer. He managed to call his co-worker and describe exactly what happened and where he was.

“Apparently I was really clear and precise in my directions,” he said.

What he couldn’t communicate was exactly how hurt he was. Liquid bear spray is orange. His biking garment — a Jasper Bear Paw Bakery jersey — was stained, but how much of it was blood Cardinal couldn’t tell.

“I said ‘it looks like I’m bleeding, but I can’t really tell,’” Cardinal said.

When Parks Canada phoned back to get a better pinpoint of his location, the burning had intensified.

“I put him on hold so I could catch my breath,” he said. “The whole can had pretty much emptied on me.”

Cardinal said he always bikes with bear spray. Resource Conservation Manager John Wilmshurst said Cardinal was well prepared and that this was a chance encounter.

The incident was the first since 2006 in which a bear made contact with a hiker or biker.

Parks Canada recommends travelling in groups and making noise while hiking and biking in and around Jasper National Park.

Cardinal, who has four scratches from his shoulder blades to his left hip, doesn’t believe there is much else he could have done to avoid the encounter.

“It’s well proven that bear spray can work,” he said. “I was lucky.”

Cardinal is sore, but this incident won’t stop him from enjoying Jasper’s trails on his bike.

This story was originally published in the Jasper Local. Visit their website: http://www.thejasperlocal.com/