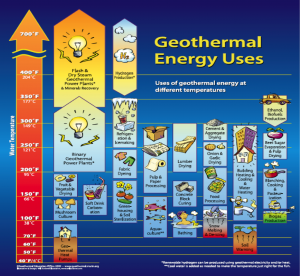 An opportunity to learn about the potential uses of geothermal heat – including the excess heat from electrical generation – may be coming to Valemount this spring.

One of the biggest problems facing geothermal development, whether generating electricity or direct use of heat, is many people don’t understand the potential and applications of the resource. The Canadian Geothermal Energy Association (CanGEA) hopes to start changing that with workshops on direct uses of geothermal heat.

“The biggest obstacle for direct use in Canada is that people just don’t know enough about it,” says Faisal Bakhteyar, CanGEA’s organizer for direct use workshops. He says the workshops will target anyone willing to listen, learn and act on the opportunities that exist for geothermal direct use, and if it goes ahead, the workshop in Valemount will cover applications best suited to this area.

One of Valemount Council’s strategic priorities is exploring options for geothermal opportunities. Council had recently received responses from Premier Christy Clark and Bill Bennett, Minister of Energy and Mines, regarding possible changes to the Geothermal Resources Act and other ways to support geothermal energy development in BC. Mayor Andru McCracken says CanGEA is especially interested in Valemount because it is close to the power grid, has a hot spring nearby (a surface indicator of good geothermal potential) and the Village is actively seeking geothermal opportunities.

CanGEA has secured a leading global expert in the use of geothermal heat for their March workshop, part of their annual conference in Calgary this year, and they are hoping to bring the direct use workshop to Valemount as well.

Council provided a letter of support for CanGEA’s application to the Canadian Geological Foundation for funding for the workshop in Valemount and Alison Thompson, chair of CanGEA, says they have also applied for government funding for the event which. If approved, the government funding would require registration fees be charged for the workshop as a sign of industry and public support for the program.

Dr. John Lund, co-founder of the Geo-heat Center at the Oregon Institute of Technology and former president of the International Geothermal Association, will be presenting the day-long “Direct Use Applications and Opportunities Workshop” in Calgary on March 28th. His workshop is aimed at developers, municipalities and entrepreneurs who are interested in using a supply of renewable heat, available constantly under our feet. It will cover topics like understanding direct use applications like greenhouses, aquaculture, and district heating, barriers and opportunities in Canada, project funding, and tools to develop a direct use project. It is not confirmed, but if the workshop goes ahead in Valemount, McCracken hopes Lund will present it here, so that residents can benefit from his expertise in the direct use of geothermal heat.

Anyone interested in the conference and workshop in Calgary can register now at http://www.cangea.ca/2014conference/.