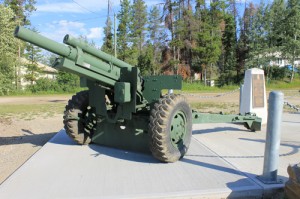 A Cenotaph Howitzer has been installed at the Valemount Legion, and will be dedicated to the memory of the RCHA Gunners and CN trainmen who perished in the Canoe River train crash.

The crash happened on November 21, 1950, when a westbound train carrying members of the 2nd Regiment, Royal Canadian Horse Artillery, on their way to the Korean War, collided with an eastbound train just east of Canoe River. Many locals assisted in the rescue effort, but 17 troops and the four engineers, two from each train, died on scene or succumbed later from their injuries. The 17 soldiers who lost their lives are counted among the 516 Canadian soldiers who died as a result of the Korean War.

In March of 2010, Les Dammann, then president of the Valemount Legion, applied to the Department of National Defense for the howitzer, as a museum piece and a visible reminder of the eternal memory of the people who lost their lives 63 years ago. A cairn was erected in 1987 by 2RCHA near the location of the collision, but it is not an easy spot to get to. There is also a monument at CFB Shilo in Manitoba, where the soldiers were deployed from.

On September 21, close to the 63rd anniversary of the crash, the Valemount Legion Branch 266 will dedicate the howitzer to their memory.

A howitzer is a type of short-barreled cannon, usually intended to fire shells at a short range and high elevation. This howitzer has a 105 mm barrel, is American made, and was purchased by the Canadian Military in 1950 for $51,500. The Legion did not have to pay for the howitzer, but the retransfer required United States Department of State approval, which took some time. It also required decommissioning, a process of welding and sealing the barrel, breach and moving parts so that it cannot be fired.

The dedication will coincide with the Valemount Legion’s 50th Anniversary, and they hope to have a parade, Cenotaph ceremony, music and museum tours, followed by dinner.