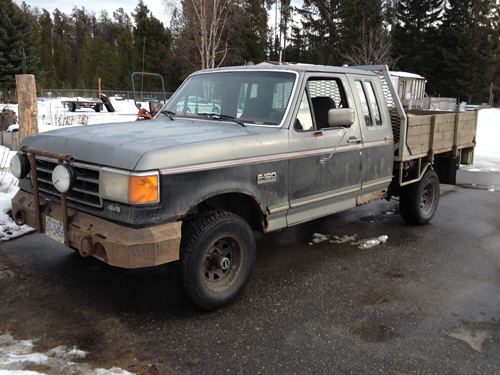 This is our truck, and she has saved us. Well, she took us for a little swim in the North Thompson River, but she let us get out.

She’s a 1991 F150, we got her for the price of the tires, and she needed some work. Owen has spent a lot of time on her, and she’s part of the family though she doesn’t really have a name. Owen says it’s a “she” because she does what she wants. The custom flat deck with drop sides is perfect for collecting firewood, and moving stuff. Notice the custom steel front bumper? Donation from a friend’s old truck, and possibly a key player in this little story.

We were coming home from Kamloops on the evening of November 13, and it was snowing in Blue River (as it always is). Coming up to Bone Creek, it was turning to big flakes, you could tell it had been snowing a lot through the day, wet snow that was gathering at the edges, accumulating on top of the old hard-pack snow. We were in no hurry, so Owen pulled slightly off the road coming up to the pullout just before the Bone Creek road to let a transport truck pass us, and then tried to pull back into the lane. But the slush had us. Obviously more slush than we though, and even though we were only going about 10 kph by this time, it was not letting us stop, nor letting us back on the road. I remember Owen saying “Oh shit baby, shit!” Right over the edge of the pullout, with no guard at the end. So now we are still parallel with the road, and almost stopped, but at a steep sideways angle down the bank, and I was just thinking “I don’t want to roll… I don’t want to roll…” Owen cut the wheel hard to the right and pointed her at the river below us, and I remember wondering why I couldn’t see anything out our windshield – it’s because I was looking directly at the black water, with nothing between us. I said “Are we going in the river?” just because I had to say something, and Owen said “Yep.” I had time to get my seat belt off and get my feet up on the dash (which felt like I was getting them under me, because the incline was so steep), trying to be ready for whatever was coming, whenever it was going to happen. We landed, surprisingly softly, but it was clear we were in the water – no idea how deep, if we are going further, or going to get swept away – and Owen’s words echoed my thoughts – “Get out!” Door handle, elbow, “I can’t…” “Come this way!” Owen’s door was open and he was standing in the door frame. I saw the ice we’d broken through, and that Owen’s door was open above it (my side sunk deeper, and the ice kept my door closed) and I leaped toward the bank – but not far enough. Through the ice, and I was thinking I can swim, but not for long in this cold. I grabbed again towards the bank, and said “Sand”, felt it in my fingers (nearly the last thing my fingers felt for a while), and climbed to the edge and stood up, with only my shoulders still dry. Thank God for wool sweaters. I knew that we needed to get to the road, and hope someone stopped to help – because they won’t know to stop unless we make it up there. Cell phones are somewhere in the truck, along with everything else, but there’s no cell service here anyway. It is storming, going to get colder, and I’m wet.

Owen climbed along the side of the truck, and I followed him on a bit of a zig-zag up the bank, testing the red willow saplings I was pulling on, hoping my grip was tight when I couldn’t feel my hands any more. Steepest bank I ever climbed, dark, snow-covered, and I am freezing. There were two spots I wouldn’t have made it up if Owen hadn’t pulled me, they were too steep. I’m glad we didn’t bring the dog. Owen made it to the road before me, and put out a hand to the vehicle passing. I just saw the lights go by, and when I got up, I saw the brake lights, and wondered if they were coming back. It took them a while to stop, and I am sure they were wondering what to do, and how to do it safely. They turned around and came back, and we met them on the other side, and I was trying to open the rear door of the minivan, but it was locked. They cautiously rolled down the passenger window. Clearly they were wondering what the hell one guy was doing on the road, but now wondering more where the hell I came from. I just remember saying to them “Our truck is in the river, and I am wet, can I get in?” Then it made sense, and they were good people, guys working for CN, on their way to McBride for a tour, they made room and offered to drive us wherever we needed. Owen at first said “Blue River”, because it’s closer, tow truck, etc, but I thought – I am wet, it is storming, they are going our way anyway, let’s get home to Valemount (dry and warm) and deal with stuff after that. Yes, everything is in the truck (wallets included), but if we lose it all now, we’re still here tomorrow, and that is what’s most important. There is a picture in my head of looking down the bank we just climbed in total darkness, and the only light is the eerie pool where the headlights are shining into the river, the dome light shining out the driver side door, and the only sound is the beeping from the interlock device.

Owen went with the tow truck the next morning, and when they pulled the truck up, our cell phones and my purse were still sitting on the bench seat. We only lost one bag of our city-trip purchases, though the tow truck (complete with flagging, since they closed the road to do it) and the repairs to a water-logged engine cost us a lot. Owen described the bank to me, how steep and long it was, the two spots just wide enough for foot holds (the two he pulled me up on to – I remember them). That custom bumper broke through the ice at the edge of the river and sunk the front end into the soft sand below. If we’d been in the car, we probably would have skipped and landed farther out in the river. If we’d rolled, or if we’d hit a tree on the way down… well. I think we both had some pretty strange dreams for a few days. We had a lot of laughs over it with friends – you have to laugh and not get bogged down thinking about what might have happened, because you might as well just curl up and die now if you stop doing stuff because of what might happen.

About three weeks later, a couple from Clearwater went into the same river in their car. They and their unborn child died there. I don’t know why they died, when Owen and I survived, but I will not waste this life asking, or feeling guilty about it. I didn’t know Skye and Courtney Buck, but I will remember them and their baby.