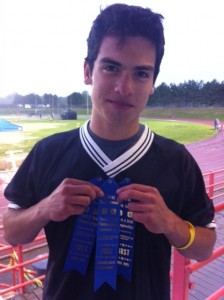 They were not easy victories. It was cold, rainy, snowy and it even hailed while the boys jogged on the spot to try to keep their muscles warm.

“All our muscles were cold,” Medina says. “The weather pretty much could not have been worse.”

He slipped and fell during the 200m race at the North Central District zone track meet. But Medina got up, kept running, and won.

The most agonizing point of the meet was after the 100m race. Medina got an early lead but a 16-year-old runner from Prince George closed the gap during the last stretch of the race. Medina, who just turned 14, flung himself forward at the finish line, dove and rolled out. But to victory?

“We had to wait 40 minutes to get all the slow motion footage and see it again,” Medina says.

“Finally it showed my chest forward.” 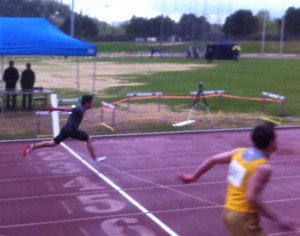 Medina participated in Provincials for cross-country. This is his first time competing in track and field.

“It can happen,” he says, adding that the winner in his age category at provincials last year got a time of 11.59.

The record for the 100m as reported by BC Athletics is under 11 seconds.

He says part of the training is core workouts. His trainers have also asked him to give them a diet plan for the week to see whether he is lacking any nutrients.