It’s a growing situation for many rural high schools, a situation made worse by young people taking online courses through other schools.

With declining enrolment – just 84 students this year, Principal Dan Kenkel says Valemount Secondary is embracing online courses – but doing so on their own terms.
Their choice? Moodle – free, online software students can use in-house to take courses not being offered in the classroom.

About 10 students used the program last year under the supervision of teacher Dan Lawless. Unlike the 50 per cent or less completion rate seen with students who do ordinary distance learning, all the students who used Moodle last year completed the courses. This year twice as many students have signed up for online courses – 24 students, or more than a quarter of the school.

Moodle uses a similar format to the online courses the students would take through distance learning – the difference is the program is done in-house, with a teacher in Valemount supervising, guiding and grading the student.

The student-teacher relationship is a big reason for the high course completion, Kenkel says.

“There’s individual accountability. They still get the benefit of doing things on their own time when and where they want, but they have the ability to come in and ask questions,” he says.

The other difference from typical distance learning is Valemount Secondary gets the education funding instead of another school offering the courses, as students in Gr. 10-12 are funded per course.

With 24 students enrolled in Moodle courses already this year, Kenkel says this unique program will keep about $23,000 in the school’s coffers this year. That’s money that can be used for staffing, provide flexibility for school activites and for supplies, he says.

“With declining enrolment we have to get smarter,” Kenkel says. “I’m telling teachers ‘For the sake of self-preservation and for the sake of keeping options open for kids, we need to start taking stuff on now.’”

For a long time, distance learning, including online learning, has been a Catch-22 for rural schools, Lawless says.

“At rural schools, where it’s smaller, kids look for more opportunities. It’s a Catch-22. They go to Fraser Valley or e-Bus and they’ll take a course there, which means this school gets less money, so our funding goes down even further to offer courses.” 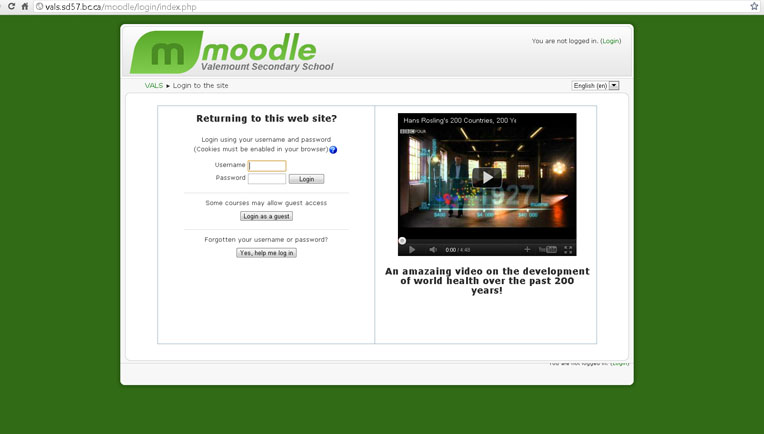 School District 57 Superintendent Brian Pepper says they are watching and learning from the success of schools like Valemount, McBride and Mackenzie – the three rural high schools in the district.

“We’re watching and learning ourselves,” he says. “We are encouraged by what we see. When you get that good success rate, you have to stand up at attention and take note.”

“We’re not going to stand in the way of any innovative ideas that make learning better for kids.”

Gr. 12 student Kelly Roy came to Valemount from Toad River, a northern BC town on the Alaska highway, population 50. The school there had just 12 children, and distance learning was the only way to keep a school there running.

She says there are differences between online learning and classroom learning, but both can be positive experiences. The biggest benefit, she says, is that it allows students to explore their interests sooner.

“There’s just the basics here,” she says. “With online courses, you have more opportunities to go deeper in what you want to do. Then you know now if you want to continue (studying) it in the future.”

She is taking most of her classes online this semester – History 12, Digital Photography 12, and Spanish 11. She says she like to stay at school while working on her courses, so she can ask questions to the teachers. She says she still likes to have things on paper, but often there is a paper textbook to go with the online course.

Gage Ringer, who is in Gr. 11, found out he could take Digital Photography through Moodle instead of taking Art. He can do the work on his own time, take breaks when he wants, and is free of classroom distractions, he says.

Four teachers have volunteered to take on Moodle courses during the year. It’s above and beyond the other four courses they teach per semester.

Learning how Moodle works is fairly simple, he says. The courses, which are free and can be downloaded from the BC Learning Network, can be modified by the teacher since they use open-source software.

The school is able to offer some courses never offered before such as Literature 12 and BC First Nations 12. They’ll be offering Chemistry 12 online this year, which is usually offered only every other year.

“To get into sciences at university in direct path, you need to have Chemistry 12 and Biology12,” Kenkel says.

He says response from students has been good – especially from students who like to be in charge of their own learning. Students can request courses they’d like to take and see if there’s a teacher interested in mentoring that.

There are about 40 computers in the school, including 20 new laptops bought by the School District this year. Students can sign them out to work on school assignments or bring in their own laptops. Students can also use Moodle at home and access the school hard drive that stores their data, projects and assignments.

“Teachers are pretty used to change. I think with the education system in general it’s a very hard shift, a hard one to turn around,” Kenkel says.

Four students are taking courses at other distance learning schools for 3D computer animation, Physics, and Equine studies – courses that teachers at the school were not in a position to mentor.