Joe Gagnon calls himself a pirate. He is a former mill worker, current gold miner and the only thing he doesn’t know about gold is the year when he found it for the first time.

Years ago he ran into an old friend who was already panning and Gagnon decided to give it a shot too. Since then, he has been hooked. After all, the gold fever runs in his family. His great great uncles were up in Dawson City when George Carmack discovered Klondike gold in 1896.

“They also found gold and they went back home filthy rich. I still have a photocopy of their claims from 1897,” Gagnon says.

The soaring price of gold is bringing the gold rush back to North America. In the past week, it surpassed $1,500 per ounce and analysts are predicting it will climb even further which means that more people want to try their luck.

Just this weekend, RCMP member Ed Burstrom, his son Clayton and Valemount Secondary School principal Dan Kenkel joined Gagnon on the Fraser River to try dirt panning – getting gold out of the roots of trees, clay and rocks.

“I’ve done some gold panning before but I wanted to hone my skills and learn more about where to look for it,” Kenkel says.

Gagnon first shows everyone how to dig under the roots of trees. With the help of a pick he breaks up the rocks and clay, loads in on to his pan and heads down to the river. Once the dirt and rocks are covered with water, he adds his secret ingredient – a drop of dish soap that breaks the surface tension of water and makes it easier to get gold off the rocks.

He throws the big rocks out of the pan and then by dipping the pan in out of the water slowly gets rid off the small ones.

“You go in and pull up and then you shake it to keep your gold on the bottom,” Gagnon says and repeats the process several times until only what appears to be black sand stays behind in the pan’s ripples. Then he looks up, calls Clayton closer to him and with a broad smile and sparkles in his eyes asks him:

“You’ve got good eyes? You see the yellow flakes on the bottom there? That’s gold, boy.”

Almost every load of the dirt that this group puts on their pans shows a little bit of shiny yellow. This makes Clayton hopeful that he will become rich and Gagnon even more excited for his annual trip to the Yukon.

Last year he spent the whole summer 80 miles northwest of Dawson City, right next to the Alaska border and harvested about 21 ounces of gold. He spent most of that on equipment for this year’s trip. And how much money did he actually sell the gold for?

“You never ask a gold miner how much money he makes.You are asking how much he’s got in the bank – I’m broke.” 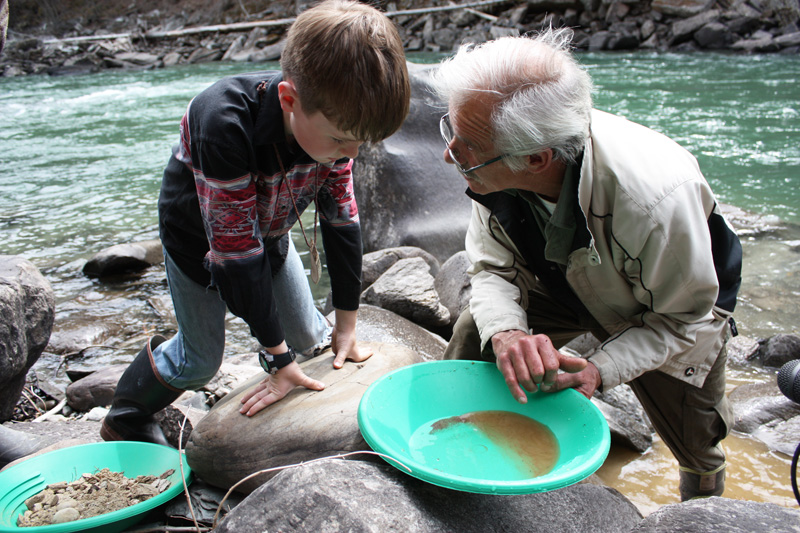