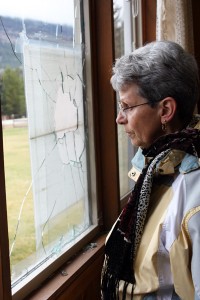 It was 6 a.m. and still dark on Monday when Pat Bennett got the call.

“When you get a call from the police at that hour, you immediately think of your kids,” she says. “I have two sons at Fort McMurray who do long hauls.”

Bennett, who is the warden for the Anglican-United Church on 7th Avenue, learned from the RCMP that vandals had broken a two-paned window on the non-sanctuary side of the church with a large stone.

She arrived by 8 a.m. to find the back room glinting with broken glass. It crackled under her feet as she patched it up with corrugated plastic, one piece of packing tape at a time.

“It’s amazing how much glass can come from that little hole,” she says, gazing at the melon-sized gash.

Windows of three other businesses on 5th Avenue were also smashed, including The Gathering Tree, IDA Pharmacy and the Marketplace IGA.

Vandals also broke the mirror and window of Const. James Bos’ squad car as it sat in his driveway, as well as egged his home. They smashed beer bottles in the driveway of Const. Simon Bentley and egged his and his wife’s personal vehicles, as well as adjusted the rearview mirrors.

Const. Bentley says the police are possibly looking for “a group of youth” who did the attack between 1 and 2 a.m. Monday morning.

“We’re looking for any assistance from the public,” Bentley says.

Luckily no one was injured, but businesses were busy sweeping glass and covering the broken windows Monday morning.

The church is looking at a $2,500 insurance deductible, meaning they’ll likely suck up the $600 cost to repair the window themselves.

“It wouldn’t be worth our while to put a claim in because it’s not even close to our deductible,” Bennett says.

The IDA windows were replaced by noon, as the window size was stocked locally. The Gathering Tree window was double-paned and only the outside pane was broken, but shards of glass still blinked from the sidewalk. 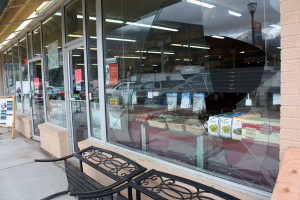 When she first saw the damage, what did she think?

“Oh, you don’t want to print that,” she says, smiling, on a break from her busy cafe.

Shaw says it was just “pure vandalism” since nothing was stolen – but the damage goes beyond the broken pane.

“They assaulted the whole town,” she says. “It costs everybody.”

She says she doesn’t want a town where every business owner has a security camera and has to lock up their chairs and tables every night.

“That’s why people come to Valemount. To get away from that.”

She has never had a problem in the two years she’s been in operation. And while the window will likely only cost the landlord $150, she says the worry it will happen again is more than the damage itself.

Shaw says she would like to see whoever committed these crimes to have to face the entire community in a gym or auditorium.

“It’s a hidden crime,” she says. “Nobody sees them because they don’t want to be seen. I think they should face the community.”

But she says she wonders why, if the vandals were indeed a group of youth, the young people were wandering the streets past midnight. She says that’s another reality the community has to face.

“Why were they out there at 2 a.m. on a Sunday night?” she asks. “These kids are angry. They’re hurting. I think the community needs to be accountable a little bit to that too.”