Robson Valley Search and Rescue and RCMP were called to the help of a 20-year-old Montrealer on Friday, after he hadn’t been heard from in eight days.

Phillip Bergogne set out on Mt. Robson Nov. 11th by himself for a six-day hike to Berg Lake. He had been overdue for two days, when Valemount RCMP and Search and Rescue were contacted to come to his aid.

Rescuers used a helocopter to sweep the area and found the 20-year-old “scared and freezing” near Berg Lake, on Mt. Robson.

“With the weather change and all that snow, he wasn’t prepped for that,” Const. Simon Bentley says. “He was also alone, had no locator beacon or anything.”

Bergogne, who had arrived in Jasper Nov. 10th, had told his family to call someone if he hadn’t contacted them after eight days.

Rescuers flew him to the info centre, and Search and Rescue drove him into Valemount, where he was cleared by paramedics.

Const. Bentley says all he wanted to do was get back to Jasper so he could get to Edmonton and fly back to Montreal. 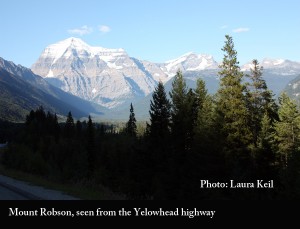