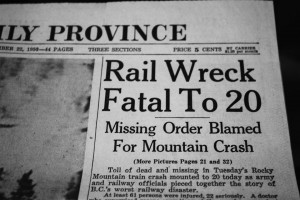 Dozens of war veterans, cadets and dignitaries will be in Valemount Sept. 10-12 for the 60th anniversary of the Canoe River train crash that killed 17 soldiers who were en route to Korea.

On that November day in 1950, Valemount resident Bob Beeson, now 96, heard from a section man that two trains had collided at Canoe River. He and Les McKirdy drove up the mountain in his power wagon to see if they could help.

“We were outside and we heard this thunder and we said ‘What’s that?’” Beeson says. “The front car was an old wooden coach with no bumper between it and the engine and they just piled up on top of the two locomotives.”

A man from Blue River, Bill Tinsley, had a pole camp below a mill on the hillside, and he was making poles by the tracks.

“He’s standing on the bank and saw the one train coming and the other one he heard it around the corner,” Beeson says. “So he took his handkerchief and waved at the troop train and kept pointing like this. The engineer waved back at him, thought he was just waving to him.”

That was the only signal the engineer had before he saw another train barrelling towards him. 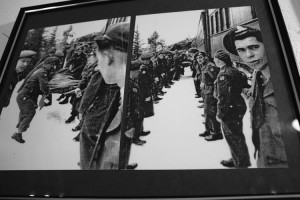 Afterwards newspapers described the scene in horrific detail from witnesses:

“This lad to whom I gave the 217s was badly scalded; there didn’t seem to be a piece of his flesh visible that wasn’t burned,” said one woman passenger who volunteered to help the train victims.

Another woman described a soldier who had a chunk of glass lodged from his chest to his back.

There were no medical supplies onboard and the troop cars, made of wood and steel, were splintered beyond recognition.

Rescuers used axes and hammers to gain entry into the contorted mass of broken rail cars. A cloud of steam hung over the two engine cars that had collided. On both sides was a 75-foot drop, but luckily no cars rolled down the hill.

The troop cars were the most damaged, witnesses said, and many soldiers were scalded when steam heating pipes broke in the coaches.

In all, 17 soldiers, and four engineers died as a result of the accident. The engineer charged in the crash was let go and never served jail time.

Jim Henderson was one of the soldiers on the train that day. Luckily, he was sitting in the rear coach, so to him, the accident felt like a “slight bump.” The train came to a stop, however, and Henderson and other soldiers got out of the train and began helping to evacuate other people.

After spending some time in Edmonton and Wainwright, they returned on a train to the coast. On their way, they crossed the same spot where the accident occurred as Henderson recalls in his book:

“As our new train approached Canoe River, it slowed to a crawl. Silently, we peered out the windows at the bits and pieces of wreckage still strewn about on either side of the tracks.”

The corner that obstructed the view is no longer there, Beeson says. They also moved the cairn up the tracks.

Dong Han of Jasper, who moved to Canada from Korea 40 years ago, says he sent a letter to the Korean authorities asking for official recognition of the sacrifice of the soldiers who died in the Canoe River train wreck.

“We very much appreciated those who sacrificed,” he says. “Now Koreans are in a position to give back.”

When Han first moved to Canada, he helped lobby to change the name from ‘Korean Conflict’ to ‘Korean War.’

Les Dammann, president of the legion in Valemount, says they may do tours of the crash site during the weekend.

Cadets will be coming in from Prince George for the parade on Saturday, as well as the Royal Canadian Horse Artillery from Petawawa – the same regiment as the soldiers who died in the train.

Dammann says in addition to being a reflection on the sacrifice of Canadian soldiers, it will be a reunion of veterans.

The actual crash occurred Nov. 21. Dammann says they chose to hold the memorial in Sept. to avoid winter conditions that would make it difficult for some of the veterans to travel.