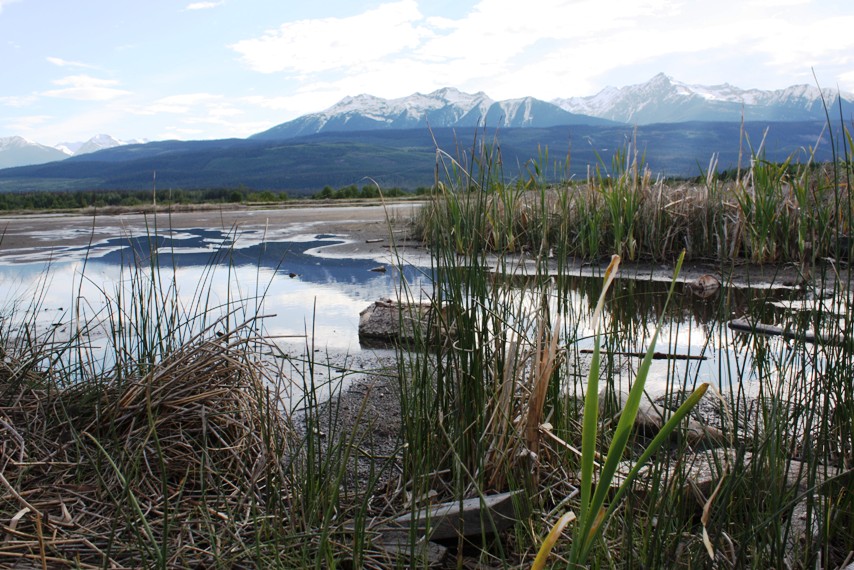 Valemount’s muddy Cranberry marsh is not much use to canoers this year. Mud flats have grown their tentacles this summer as another dry season takes its grip.

Baer says the water table has dropped some 15 feet in the last seven years. He had to dig a 305-foot well to reach water. And other water around his property is still drying up.

“Last year, we had three out of four dugouts dry. This year all four are dry.”

Now his horses and cattle have to come up to the house where there’s a well. They had to buy hay this year because didn’t have enough water to make it themselves this past year.

He guesses part of the problem is the low snow-pack.

“In the last couple of years the snow has had no substance to it. It’s just been kernels, but no content.”

People with standard 18-foot wells have now had to go deeper, he says. The water quality has also gone down, with more iron, Baer says. Some residences near the marshland are on village water – but many still get their water from the ground.

“You can’t condemn people for wanting to move to the country, and have a five-acre plot of their own,” Baer says. “But on the other hand, when there’s a lot of hot years and we’re on a sand pile, then the water levels take a beating.”

The marsh itself has never been full, says Bruce Harrison with Ducks Unlimited. But the combination of leakage, little rain, and below-average snow-pack has meant the marsh is looking more like a meadow.

Ducks Unlimited has been monitoring the marsh water levels since they created the wetland in 1981. They built the dyking systems and pathways around the marsh. They also created the water controls that prevent the water from running out of the marsh. The land became a provincial wildlife management area after it was created.

The two sections of the marsh – McKirdy and Bailey – were never filled completely, Harrison says. Part of the problem is leakage. Ducks Unlimited punctured gravel seams in the earth under the marsh during construction, which now lets water escape into the water table, instead of being held there as it normally would be.

“The Bailey portion is dry, and it was never intended to be dry,” Harrison says.

“There is no improvement in sight, unfortunately,” he says.”Without a supplementary source of water such as McKirdy Creek, we’re at the mercy of Mother Nature.

McKirdy Creek used to run into the marsh, but was diverted in the 1950s to run into Canoe River instead.

“That sort of thing would never happen now, but back in the 1950s, it was different rules.”

Ducks Unlimited has looked at a number of ways of increasing the water in the marsh since the 1980s, Harrison says. One way, he says, would be to try to re-divert McKirdy Creek so it empties back in Cranberry Marsh instead of the Columbia system – but Columbia system is now covered under an international treaty.

“To try to divert water out of the Columbia system which also travels through the United States, would exceptionally difficult to open up that treaty again.”

He says even if you could do that, there’s not a whole lot of water open to use.

“Even if you got permission to do that, that water is mostly under license for other users, so it’s not certain we’d even be able to put it into the marsh for conservation purposes.”

He says the post-treatment water from the village that flows into the marsh helps some to sustain the water level.

“It’s maybe a little sterile, but it’s still pretty good stuff. So that definitely helps, but there’s just not enough water flowing into Cranberry to make a difference,” he says.

He says wetlands across B.C. have suffered from a dry decade. He says the reality is that most wetlands in B.C. are still recharged to a large extent by the snow pack, which has not been replenished.

Maria and Gerhard Oberauer live 1 km from the marsh on Cranberry Lake Road. They built a new well this past winter, after losing raspberry bushes and fruit trees.
“The ground was completely dry,” Maria says.

They came to the Valley 15 years ago, and said they noticed the water level dropped when the old golf course was put in. Now that the gold course is gone, however, it’s unclear where the water is going.

Wayne Van Velzen, Area Supervisor, Mount Robson Ministry of the Environment, Parks and Protected Areas Division, who oversees the marsh, says he has investigated all the water that usually flows into the wetland.

He says the run-off is quick, the snow-pack is low, and the mountain pine beetle has destroyed a lot of trees that used to retain run-off.

“The root systems of those trees aren’t retaining the moisture in the soil,” he says. “As much as the pine are consuming water, they are also conserving water, whereas now the water is just going down the slope and disappearing and not really having a benefit.”

The most graphic example, he says, is homeowners who have been here 20-30 years who have never had trouble with the water table until now. They have had to decrease consumption or build new wells.

“The marsh just happened to be the most graphic example of that reduced water table,” Van Velzen says. “You can pour water into it all you like and it’s just going to get distributed into the water table, instead of staying in the marsh.”

“We just need more water coming into it.”