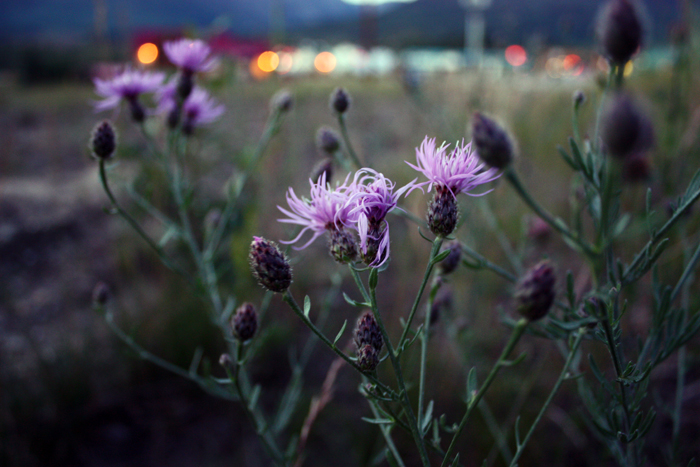 Spotted knapweed, Oxeye daisy, and Sweet White Clover. At first glance, they are pretty flowers growing hay-wire in the ditches. But Andrea Eastham of the Northwest Invasive Plants Council knows these plants could pose a serious threat to biodiversity in the Valley.

Valemount has the most Spotted Knapweed in the north-west of the province, she says. It’s spreading along the highway, tiny plant by tiny plant.

“We’re starting to see more show up in Mount Robson Park,” she says. “We don’t want it to take over like it did in the southern interior.”

In the southern part of the province, the plant is taking over 30,000 hectares of range each year, she says – roughly two and a half times the size of the City of Vancouver.

The invaded rangeland is useless to livestock and wildlife, as the plant chokes out other species where it grows. Native plant species are choked out, which impacts ranchers.

Spotted knapweed is not yet established in the Valley, but transportation corridors are a fast track for the plants to spread.
“When the mower is mowing highway 5, and it comes from down south, he’s spreading the Knapweed farther north all the time,” she says. “It’s just a fact of life, the way we move it around.”

Knapweed can survive in a number of different climates. It’s not easy to cut out, either. Spotted Knapweed sites need to be treated for 30 years, she says.

Large infestations of Marsh Plume Thistle have cropped up in the Robson Valley and Prince Rupert – the only two places in B.C. where they have been discovered.

“You have cut blocks in the Robson Valley that are just covered,” Eastham says.

The plant council uses a tool of containment lines. If they have a large infestation where they can’t get rid of all the plants at once, they draw a circle around the infestation and begin ensuring no plants escape outside those lines.

“We slowly work our way in,” she says.

In McBride the Common Tansy and Canada Thistle are two plants that are a problem around the village.

“The Ministry of Transportation may have been spraying the road right away, but they couldn’t treat what went off into private property or the bush,” she says “The weeds don’t know we have all the lines on the ground, and they weren’t behaving.”

The Village of Valemount has contributed $2,000 to the council for the last few years. This year, it has cute its funding and decided to take on the invasive species work itself, piggy-backing it on other municipal work.

“If a village employee is working in a particular area and they see it, then they deal with it,” says Valemount village administrator Tom Dall. “It’s just piggy-packing on our own regular maintenance schedules for the parks and grounds.”

Last year, the plant council spent about $7,000 more on the Valemount area than the Village contributed.  Other jurisdictions subsidize the other areas, she says.

“Whoever has money left over picks up the tab for partners who either can’t or won’t contribute,” she says.

The plant council has trained village employees on how to remove invasive plants. Eastham thinks it’s a good thing the village will be taking on the work itself, even though they are no longer contributing money to the organization.

The plant council will continue to treat plants in the area.

She says there is some hope for eliminating invasive plants in the area. They are making progress on the Marsh Plume Thistle sites near Kinbasket Lake.

“Those sites are getting smaller and we will eliminate those.”

She says there are plants like the Common Tansy that aren’t established here because of the work they have been doing.