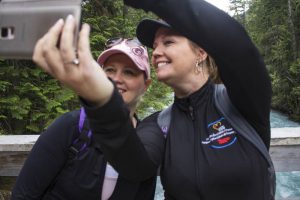 B.C.’s tourism numbers are up, and the trend is holding true in Valemount too.

The rise in tourism is directly related to the low Canadian dollar, according to the B.C. Government, and for a place like Valemount, which relies so heavily on tourism, the low dollar might not be such a bad thing.

“It’s been so busy, as you can see when you drive through,” says Silvia Jungo, co-owner of the Swiss Bakery. “Our business relies on tourism, just like every business in Valemount,”

“Canada is a safe and stable country, which is why many euros travel here, but it’s busier because of the exchange rate,” she says.

Those numbers are padded with extra visitors from Mexico being up 29 per cent, India up 11.7 per cent, China up 10.2 per cent, Europe up 5 per cent, United States up 4.9 per cent and Asia/Pacific up 2.3 per cent.

“These spring tourism numbers have set us up for continued growth through the summer season,” she says.

For the first five months of 2016, according to the B.C. Government, American tourists were up by 16 per cent, which is where Valemount differs slightly.

Numbers from Valemount’s Information Centre show that in 2015, American tourists made up eight per cent of total tourists, while in 2016 Americans have made up just two per cent.

Between May and October in 2015, Valemount saw 22,587 total visitors, according to the information centre’s numbers. They show that while both May and June of 2016 saw more visitors than 2015, this July has been far less busy, which makes projecting an annual total difficult.

“Keep in mind we’re only three quarters of the way though the month of July,” says Lori McNee, director of finance for the Village of Valemount.

“I’m confident the visitor numbers will be equal to or greater than 2015,” she says.

If last year’s numbers are any indication, August was the information centre’s busiest month.

Tourists in Valemount have been most interested in finding maps and directions, requesting adventure recreation information, or asking about community specific information such as hiking and walking trails, or village information, according to the Valemount Information Centre.