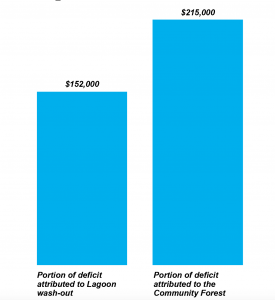 There is a big difference between running a deficit, and running in the red, according to McBride’s administration.

Mayor of McBride, Loranne Martin, says the Village hasn’t used up all its reserves and has more than enough funding to cover the $367,000 shortfall this year.

Local government cannot budget for a deficit, as it goes against the community charter, according to the B.C. Government’s Ministry of Community, Sport and Cultural Development, but events may occur over the course of a year (emergencies or collection short falls), which may force expenditures to exceed actual revenue, a government spokesperson says.

The Community Forest was expected to run a deficit, according to Martin, and she says there is more than enough reserves to handle that. Martin says part of the issue was the decreased cut caused by previous overharvesting. Last year the Community Forest also let go of their general manager and hired a consulting firm to manage and guide the organization until a new general manager is hired. The community forest then settled a $95,000 lawsuit with the former manager.

Martin attributes the $152,000 shortfall incurred by the Village to the Lagoon Road washout; the repairs were recorded as $212,000.

The washout occurred after a number of beavers went into Dominion Creek, and the Village opted to move the animals. When moving debris the beavers had left behind, Martin says human error damaged the culvert, which led to the lagoon road washing out.

The culvert is near two fish-bearing streams, Martin says, which made its urgent replacement even more important.

“It was an emergency,” Martin says.

Once they found a culvert big enough to replace the old one, as long as work was being done, there was an environmental monitor on hand to make sure the salmon bearing part of the beds weren’t damaged.

“That could potentially still come back this year and reduce the deficit,” says Martin.

“You don’t plan for a deficit. You plan to use the money and, on occasion, you may have to go into reserves if something happens, but you shouldn’t plan for it,” she says.

Don Lidstone, a lawyer in the field of municipal law, says a person must understand generally accepted accounting principles and the community charter in order to properly understand a municipal deficit.

Martin also confirmed the resignation of McBride’s Chief Financial Officer, Enid Keir, but would not elaborate on the topic.