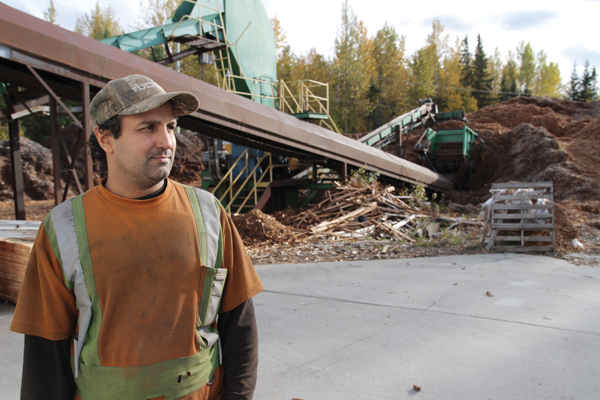 BKB Cedar and Menards have a good relationship. The McBride cedar mill provides the home improvement store with 5.4 or 6.6 ft posts and rails 8 or 10 ft long. When BKB Cedar opened in 2013, co-owner Raj Basran told his employees it’s up to them – produce a good quality product that meets their orders and they’ll keep their jobs.

Menards’ post and rail sales are up, Basran says. And BKB Cedar has been employing 15 people at industrial wages – with benefits.

But all that is up in the air after the McBride Community Forest – where the mill gets the bulk of its wood – clamped down on logging.

“No one’s allowed to pick a stick out of there,” Basran says, who has a contract with MCFC for 15,000 cubic metres/year.

The Community Forest halted all logging after the board discovered they had gone over their 5-year cut allowance. Their new cut allowance does not begin until the end of 2016, Basran learned in a
meeting with the board.

The Community Forest board – made up of the local Village Council – let go of the MCFC manager this summer and thus far no replacement has been named.

In a statement Aug. 7th posted to the MCFC website after the firing, the board said “The Board’s top priority is to continue to ensure wood is available to local mills and we will do our upmost to fulfil this need.”

The board announced Sept. 10th that it was hiring consultants to review the community forest – including “a review of the corporation’s governance and the forest management and operations framework.”

The Goat has sent multiple interview requests to MCFC board members over the past month but has not received any replies to our questions. They did release a statement regarding the audit in the form of an ad.

While MCFC promised the mill 10 loads earlier this month, only three have arrived so far. Basran also arranged with Carrier Lumber to provide him enough fibre, but a road permit, road upgrades and weather stand between him and the trees this fall.

BKB and other local mills could face a long period of layoffs. But Basran says knowing the industry is key.

“I think it’s lack of knowledge,” he said of the MCFC board. “They’re scared because they might get penalized.”

Basran says the penalty for overcutting is double the stumpage – from 25 cents a metre to 50 cents. But often the cut allowance only applies to white wood, not the cedar he processes at BKB. He says the District Manager has exempted McBride cedar from the cut allowance in the past (the Goat was unable to verify the amount of cedar exempted in the past by presstime).

Basran says the board’s fear and lack of knowledge are preventing quick action. And timing is everything. He needs to tell Menards how much wood he is able to provide by the end of this fall – otherwise the 2016 season could be a bust.

“It’s a huge risk. That’s what we’re up against right now. I’m actually fighting to keep the market alive.”

Even if his cedar were not exempt, Basran says the penalty levied for the 2,000 cubic metres he is requesting would only be an extra $500; BKB would pay MCFC $6,500 for that much cedar.

He says the board should allow him to harvest just cedar in order to keep the mill, the market and the jobs alive.

Some worry that going over their cut allowance could jeopardize the purchase of Carrier Lumber’s tenure, a deal in the works for some time. The MCFC has been plagued by infractions in recent years and the new mayor Loranne Martin, elected last November, spoke about a need for reform.

The Community Forest has faced numerous logging infractions including contractors logging in old growth management areas and damaging a fish-bearing stream. The company received a poor assessment by the BC Forest Practices Board two years ago.

“As Mayor and Council it was and is our responsibility to ensure that we appoint responsible members to the MCFC board of directors who understand and are willing to carry out their legal duties and responsibilities,” Loranne Martin wrote on Facebook during her election campaign. “To do anything less …would be to shirk our duties as your elected representatives and could create the potential for serious liability issues.”

When asked if there could be other costs to exceeding the cut, Basran said he wasn’t aware of any but it’s possible.

“It’s the government, right. There’s lots of back door scenes we general people don’t understand. But bring it to the table. Let us know so we can understand. Maybe we can help. We’ve been logging
here long enough … Let’s work together.”

“From where I’m sitting, it’s a simple solution.”

Basran says the board and auditors informed him they will likely get him wood by freeze-up (around December), which is also an option from Carrier Lumber. But whether or not he is able to retain his contract with Menards is uncertain.

“Now if we go back to them and say we can only do 40 loads or 30 loads? They might just say that’s too small for them; they don’t want us as a supplier.”

When asked what could be done to improve the MCFC board, Basran said having some continuity of board members and directors understanding the board’s history.

“They need to understand they’re fighting for that chair and that chair has history. They need to do everything in their power to figure out what that history was, why things are done. Have they ever met with the past board of directors?”

Meanwhile BKB Cedar’s employees sit at home, waiting for their employment insurance cheque to arrive in the mail. Every two weeks, the mill pays out $25,000 in wages, plus other purchases in town.

Basran says regardless of what the Community Forest does, his plan is to run a 4-5 man crew and buy about 100 loads on the open market from Carrier. A lot of that wood won’t be available until freeze-up – when his market may also have frozen up.

“I understand the process MCFC has taken. They are doing the right things by educating themselves and doing the audits. (But) if we lose that market, it doesn’t matter how much the Community Forest has got. They could have all the wood in the world, but it’s not going to help the town.”