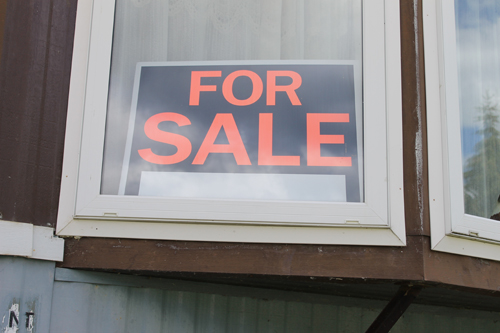 The lack of housing options is “a huge crisis in Valemount, and very scary for a family to go through,” says one young mother of three who has been searching desperately for a place to rent for her family.

“I did find a place, but it is not permanent, it’s only for a year and then the place will be up for sale and I will be back in this situation,” says Duska Olson. She has three daughters in elementary school.

Olson says she’s applied to a local housing association and was told there was no more Aboriginal housing in the village. She was offered help through a low income working family program, but the family makes more than the program allows.

“Money is not a huge problem,” says Olson, both she and her boyfriend is working. “There is just nowhere to rent in town, and we don’t have the money to buy at this time. Maybe one day.” She thinks a local non-profit housing association would be good for families.

“I don’t want to have to leave Valemount, but it looks like that might be what we have to do by next summer if I can’t buy something,” says Olson.

The Prince George Metis Housing Society currently has about half a dozen houses in the Valemount area, and has recently had to sell a few others. They may have to sell more – and it should be a federal election issue, says the Leo Hebert, the society’s director.

The society’s mandate is to provide safe, healthy and affordable housing for Aboriginal people of all incomes, ages and capabilities. But Hebert says increasing housing costs like taxes and utilities, transfer taxes, a lack of historic maintenance, and most drastically, the loss of federal subsidies for housing programs mean the organization has to make some difficult decisions, including selling some of their properties in Valemount and other areas. He says his board wants to focus their efforts closer to home, but the Society would be willing to work with local partners, if there is a role for them to play in Valemount and the Robson Valley.

“Back in the 80’s, when Canada Mortgage and Housing Corporation created both programs, they were subsidized,” says Hebert. “In 1994 the federal government ended this type of social/subsidized housing. No more new housing, but they continued to provide the existing subsidies until the mortgages were paid off.” Then in 2007/8, CMHC wanted the provinces to take over the programs. So BC Housing took over the operating agreements, and then put out a request for organizations to manage for them.

The Aboriginal Housing Management Association (AHMA) is a group of some of the 41 aboriginal housing providers in the province. “BC Housing said ‘Why don’t you do this?’ and transferred it all over to the AHMA,” says Hebert.

“When they are transferred, there are no extra capital dollars; you get the properties as-is,” says Hebert.

But the cost of providing housing is not just the mortgage – there are also costs like utilities, taxes, maintenance, a reserve fund for emergencies, and staff. The subsidy from the government was only for the mortgage, and once the original mortgage is paid off, which is now the case for most of these properties and will be for the rest very soon, there is no more subsidy. And in many cases the units weren’t maintained appropriately, says Hebert, for a variety of reasons.

He says the AHMA in turn put out requests for housing providers to manage the properties as is. The deal the Prince George Metis Housing Society worked out means each of the properties gets transferred to them when the subsidy runs out. His society doesn’t have charitable status, so they have to pay the transfer tax on any properties they take over – 2 per cent of the first $100,000 and 1 per cent of the remaining value of the property, says Hebert.

“We got involved because it is a northern asset, one created by government; we want to ensure the value of that asset stays in the north,” says Hebert. But the houses in Valemount are old, and need a lot of work.

“We inherited the properties with existing tenants; people were paying very little for their rents. And when you lose the subsidy, you are operating on a loss. We can’t afford to carry that,” says Hebert. He says they’ve had some conversations with people in Valemount, and with the Lheidli T’enneh, whose traditional territories extend to this area, but unfortunately there is no aboriginal organization in Valemount.

“Unless some entity in the Valemount area steps up – who do you transfer it to? Unless some bigger heads get together and try to figure out a strategy…” says Hebert. “Valemount is in a unique situation.”

And some people who need help with housing may also need other help that is sometimes not readily available in a small community.

“I know there was an elder, she had some health issues, and we did some wrap around support for her, but the affordability just wasn’t there for her.”

The Prince George Metis Housing Society has been doing some work to improve affordability, fairness and sustainability of their programs when the federal subsidies come to an end, including starting with a new rental policy, to staunch some of the financial bleeding the society experienced when the first groups of subsidies came off. The Society is busy trying to roll that out now to their properties in Prince George. And as a longer term strategy, Hebert says his board wants to stay focused closer to home. So for Valemount?

“We are part of the community; we are paying taxes. Is there a role we can play? At this point I have no idea,” says Hebert. “You tell us.”

“Do some research on what is really happening with social housing, it’s a federal government election issue as far as I’m concerned,” says Hebert. “Check out the video at http://housing4all.ca/housing-for-all-video and let your candidates know what the situation is.”