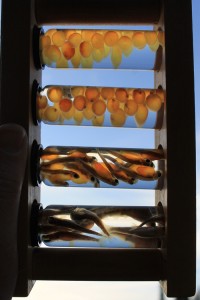 McLeod, Member of Parliament for Kamloops-Thompson-Cariboo, and Zimmer, MP for Prince George- Peace River made the funding announcement in Valemount on behalf of Gail Shea, Minister of Fisheries and Oceans.

Bruce Wilkinson, president of the Swift Creek Watershed Society, says the salmon need things like certain depths of water, certain size of gravel along the bottom, protection from predators, and certain flow speeds to have their best chance at spawning successfully, and for the young to survive their first months in Swift Creek before heading down the Fraser River to the ocean.

Wilkinson started the Swift Creek Watershed Society when he recognized the need for the restoration work to protect salmon habitat in the creek after severe flooding in 2012. The flooding also nearly destroyed Valemount’s municipal water intake.

Funding since 2013 has helped rehabilitate sections of the stream bank both up- and downstream from Valemount’s municipal water intake, and this phase will work on improving more of the in-stream habitat.

Wilkinson says he and Mike Wallis of Wallis Environmental Aquatics will go back to the watershed plan to decide which sites to start with. There are 17-18 sites they’ve already identified but need to reassess, as some of the work they’ve done along the stream banks is already improving the in-stream habitat for salmon. He says there were about 300 Chinook spawning last year, but he thinks there could be as many as 5,000 if this habitat improvement works, because more will survive to come back.

Brian Riddell, CEO and President of the Pacific Salmon Foundation, said in a news release that the foundation is pleased to be able to invest some of the proceeds from the federal Salmon Conservation Stamp into these projects.

Chinook are a big draw for visitors during the spawning season in Swift Creek, through August and early September. Sockeye have also been spotted in relatively large numbers in the past few years, just downstream from the municipal water intake, but where they’ve come from is a bit of a mystery. They hadn’t been spotted in the area since the 1980’s, and normally spawn in lake-headed streams.

Wilkinson joked that we need more money to figure out where they are coming from, but he has a theory they could be Kokanee that were stocked in Moose Lake that have come down the Fraser. They can’t get back to Moose Lake because of the 10 foot falls at Overlander, but Kokanee are basically land-locked sockeye, and once in the Fraser, Wilkinson thinks they are reverting back to Sockeye. Chief Fortier says the theory could have merit, and the fisheries department is doing some DNA testing to try to figure it out.

The funding comes from the federal government’s Recreational Fisheries Conservation Partnerships Program, part of the National Conservation Plan. Started in 2013, the program’s goal is to restore and support the ongoing productivity of the country’s recreational fisheries. The government says it proved immediately successful, prompting an increase in federal investment to a total of $55 million until 2018-2019.

The Swift Creek project was the first to get funding under the new program, and has received $230,000 to date, administered through the British Columbia Conservation Foundation.

McLeod says she is proud to have served Valemount, introducing Zimmer who is the Conservative candidate for Valemount’s new riding for the federal election this October.

Zimmer thanked Jen Robinson, marketing coordinator for Tourism Valemount, for organizing the meeting at the Visitor Information Centre. “This was a great first impression of Valemount,” he said.

Since its launch in 2013, the Recreational Fisheries Conservation Partnerships Program has committed almost $16 million to more than 280 projects across Canada. Over $10.4 million was committed under the fourth round of funding for over 180 projects across the country between 2015 and 2016.

The Swift Creek Watershed Society is also working with other partners to help protect the fish and educate visitors on the uniqueness of the upper Fraser Chinook that return here annually. A new viewing platform was completed last year at George Hicks Park to help maintain a buffer between the fish and the viewing public. And with support from Columbia Basin Trust’s Environmental program, the Regional District of Fraser-Fort George has recently partnered with the society to build a new information kiosk to replace one that fell down in a storm last year. Wilkinson says the signs will be installed shortly, and will help educate visitors and ask them not to enter the water or disturb the fish.

“People that visit George Hicks Park and see the spectacle of the returning fish are very inclined to help in the protection of the fish and the habitat,” says Wilkinson.