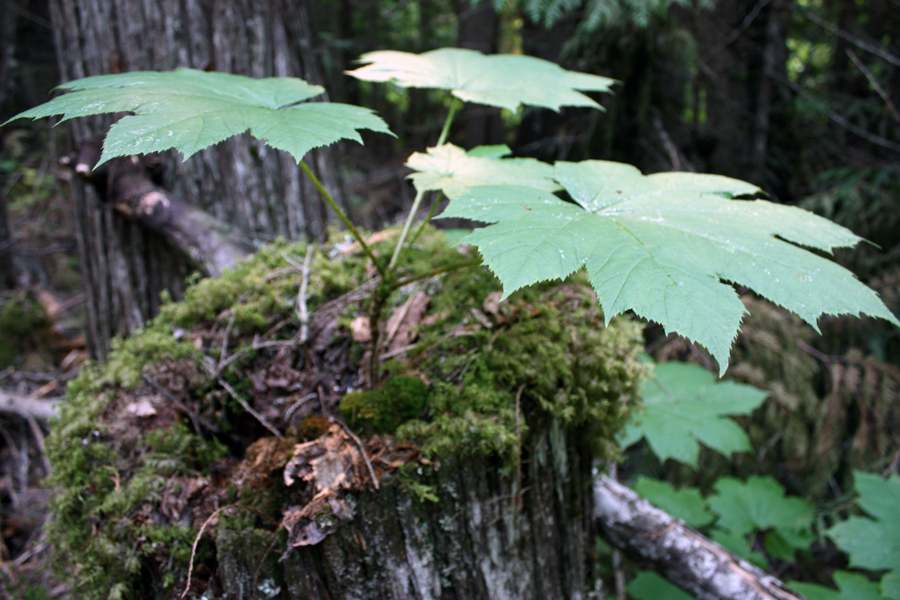 Five years ago Norm Goodell cut down trees he wasn’t supposed to. It was a mistake a hundred years in the making.
McBride’s community forest contracted with Walter Jervis, who contracted with Goodell, to log a block of forest about 20km up Hwy 16. The community forest gave straightforward instructions to log the young wood in the area – the young balsam, spruce, and Douglas fir – and stop when they got to the old cedars and hemlocks, which were part of an old growth reserve.

The Ministry of Forests, Lands and Natural Resource Operations designates chunks of trees that loggers can’t log in order to keep forests diverse, explained Greig Bethel, a public affairs officer with the Ministry. Different sorts of wildlife – including tree diseases – live in and around trees of different ages, and if loggers logged straight through big tracts of land, it would be dangerously homogenous when they replanted all those young trees.

In this case, there was a natural line between young and old dating from 1912, when the railroad set the forest on fire from around Prince George clear to Moose Lake, explained historian Marilyn Wheeler. The railroad burned it to make room for the track, because burning the trees was easier than cutting them down.

“If you see early photographs of McBride, for example, you can see right down to the rocks on the north side of the valley because that all burned off,” Wheeler said. “It was pretty horrendous. There were people who took to the river to escape the fire.”

Goodell worked to the edge of one patch where that fire burned, where the trees, now 100 years old, had grown amidst the ashes. They stopped when they reached the cedars and hemlocks that survived that blaze. The boundary between the timber types was so stark that the community forest hadn’t bothered to tie the neon plastic ribbons, or paint the blue lines that are almost always used to mark where loggers can and can’t log.

“There was a mention at one point that there were no markings on the boundary,” said Jervis, who worked as a logger for about 15 years. “I was never on a job where there was no ribbons or blue line.”

McBride’s community forest put Goodell and Jervis in a bad situation, because the old growth reserve included some of the young trees, said Gene Runtz, a Registered Professional Forester who’s advised Jervis and Goodell during the investigation into the illegal logging.

The lines on reserves don’t necessarily follow natural boundaries – they’re drawn up in offices hundreds of miles away. It’s impossible to know where one can and can’t log without using a GPS, and Runtz said few loggers know how to. That’s why there’s blue line and “ribboning.”

“In old growth, it’s purely a map notation,” Runtz said. You can’t go by what’s out there, you can only go by your GPS unit.”

And so in 2013, a professional forester surveying the area came upon the site in the reserve and found nothing but stumps, and he called it in. Jervis and Goodell had logged about 13 acres worth of forbidden wood.

The Ministry of Forests has been investigating the circumstances around that illegal logging, and it’s slated to issue a verdict, and possibly a penalty, in late April.

But the McBride Community Forest Corporation is breaking the suspense. They admit it was their fault for assuming the old growth area was only the old trees, and putting the unknowing loggers in a position where they followed orders and broke the rules, said Marc von der Gonna the general manager of the McBride Community Forest Corporation. He says they’re more diligent now.

“We’re flagging absolutely every boundary at this point,” von der Gonna said in an interview. And since the trespass onto the old growth, “the Ministry [of Forests] has inspected us up the ying yang and found nothing.”

Von der Gonna added that he expected the Community Forest to get a small fine, if it got one at all.

“Under three thousand bucks,” he estimated.