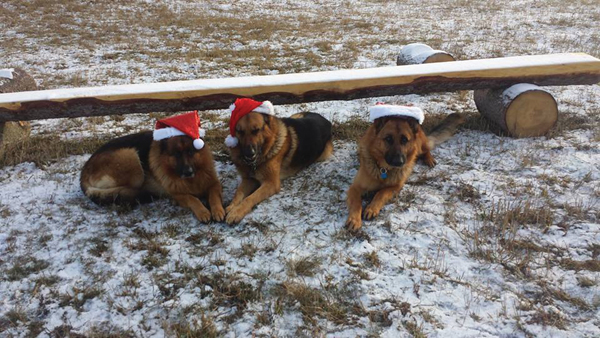 Nicola Redpath, owner of the Prince George Equine and Animal Rescue, was not allowed to foster out the German shepherds seized after the shoot-out near Valemount in September that left their owner dead. But with the help of some donations from the community, the “Valemount dogs,” as she calls them on her website, have been doing well in her care. Now, after four months, Max, Rango, Timber and Zeus will finally be able to be adopted.

Five dogs were brought to her by the Conservation Officer after they were tranquilized at the scene of a shoot out between RCMP and John Buehler down the west side of Kinbasket Reservoir in September. The shoot-out left Buehler dead and his daughter Shanna suffering from three gunshot wounds. The female dog, Nova, was released to Shanna’s family in early October, though Shanna was still in the hospital. A sixth dog, named Seven, has never been caught, though it was reportedly spotted a couple of times by hunters down the West Canoe Forest Service Road. It was last seen at the end of October.

Though she primarily rescues horses, Redpath agreed to take the dogs in because she thought they would have been put down on site if she didn’t. The Prince George SPCA had refused to take them, because they were not equipped to deal with so many dogs, all deemed “aggressive” by the RCMP.

Redpath believed the dogs could be successfully re-homed, but was concerned the courts might still order the dogs put down, so she became an advocate for them, to try to make sure they were not destroyed.

Communication with the Crown prosecutor about the dogs has been “awful” says Redpath, but she did get some information about what would happen in court on Jan. 8th.

“Either Ms. Buehler is to surrender the dogs which allows us to put them up for adoption, or they will be euthanized if she doesn’t surrender them,” Redpath told the Goat the day before court.

“They said there is no way the dogs will ever go back to her.”

A petition on Change.org was organized to ask decision-makers to spare the lives of the dogs, and was signed by over 14,000 people. Redpath says the organizer of the petition was told by the Crown the dogs could be surrendered to the SPCA if Shanna Beuhler agreed.

“If they are signed over to the SPCA, that’s fine,” said Redpath. “I would like to follow it all the way through, but I’m certainly not going to make a stink about it. It’s better than a death sentence.”

She has a good relationship with the Prince George SPCA, and she hopes she can have some influence as to where some of the dogs go. She’s already pre-screened some families, and people have come to visit the dogs. She has potentially found good, qualified homes for three of the dogs, Zeus, Timber and Rango, and there are others who have expressed interest.

“They just have to get neutered,” says Redpath. “That would be one of the stipulations the court would impose, which is fine, that’s part of our policy anyway, as well as the SPCA’s.”

Shanna Buehler did not appear in court on Jan. 8th, but her lawyer Shawn Buckley told the court she had agreed to surrender the four dogs currently at the rescue centre.

Crown prosecutor Geoff McDonald confirmed the dogs would be surrendered to the SPCA, as that is the only organization the court has the authority to surrender them to.