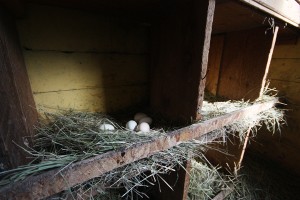 Chickens could be allowed in the village, if Valemount Council and the community agree with the Advisory Planning Commission.

Based on positive feedback from Valemount Council’s second Community Conversations, Village staff has come up with some revisions to the Animal Control bylaw that will allow chickens in residential zones within the village. The draft bylaw was referred to the Advisory Planning Commission at Council’s last meeting, and the commission met on Monday to discuss it with Corporate Officer Braden Hutchins and Local Government Management Intern Cameron Bell. With a few changes, the commission recommended the bylaw amendments be referred to Council.

Paul Johnson is a current member of the APC and was on the committee that worked on the updated animal control bylaw several years ago. “At that time I tried to get chickens in the bylaw and it got voted down,” he said at the meeting on Monday. Bill Kruisselbrink, Chair of the APC, said the comments at the Community Conversations showed the public was clearly in favour of allowing chickens.

Some of the changes the APC recommended were not allowing roosters and limiting the poultry to chickens only (no ducks, geese or guinea fowl since, which were thought to be much louder and potentially aggressive); removing the minimum size for a lot, but not allowing more than one chicken coop with a maximum of four hens to each lot, and ensuring the coop and run are both within setbacks; and not allowing the slaughter of chickens within the village. Rundi Anderson, member of the APC, said it didn’t make sense to put a minimum on the lot size, if the goal was to be sustainable and promote urban food production. Hollie Blanchette, Council’s representative, said slaughtering, if done by someone inexperienced, could be traumatic for the animal as well and neighbours, and was best done by someone with experience, possibly one of the local farmers who raise chickens and sell eggs now.

Bell said the bylaw changes have been discussed with Dean Schneider, the Village’s bylaw officer and building inspector, who agreed it made sense for potential chicken keepers to apply for a permit. They agreed that would be an opportunity for the Village to ensure residents had good information about how to properly care for chickens, without being too onerous in requiring an inspection. The Goat reported in August 2011 that then- Councillor Murray Capstick spoke out against allowing chickens, saying the Village at that time was not equipped to monitor and enforce the rules if people didn’t adequately care for their birds.

At the time, Jim and Terry Stewart, who live just outside Village boundaries and raise chickens, though allowing backyard chickens was a great idea. They say especially for young families, it is a good opportunity to learn about where your food comes from, and how to look after animals.

Bylaws that allow backyard chickens are a growing trend across North America, with websites like www.chickensinlangford.org tracking which municipalities allow them, and others like urbanchickens.org offering advice about the benefits of raising backyard chickens, how to care for chickens and how to get them legalized in your community.

On Monday the APC also discussed changes to business regulations for home based businesses, a topic they had considered early in the year. However the commission had not met since early 2014, and have again referred the issue to staff for more information. All APC meetings are open to the public, and the next meeting has tentatively been set for September 16 at 2:30 in Council Chambers. Hutchins says the Village plans to make the agendas available on the Village website, and to post the meeting schedule to a calendar available in the Village’s upcoming new website.