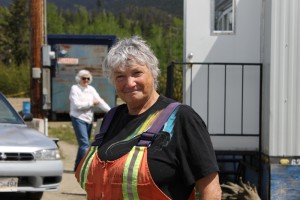 A well known face at the Valemount Transfer Station will soon be off on new adventures, with a send off from friends and the community.

Jane Shaw who has worked for the Regional District for almost 13 years, retired May 31st, and some of her friends saw her out of the gate at the end of her shift.

Her friend and local resident Carol Bustin says Shaw has been “an angel at the transfer station.” She has certainly been a friendly face, especially at the Swap Shed, and she says keeping the place clean and tidy – and safe – is just part of the job.

“It’s a family show; you don’t want inappropriate reading material, that sort of thing,” says Shaw. She says you have to check it seven or eight times a day, and she also makes sure the clothes are clean and not falling apart, and that it doesn’t get too crowded.

But Shaw is not just known for her work at the Swap Shed. She is also known for hosting bible study at her house on Wednesdays, and helping out organizations like the Crafters Guild. Shaw was a “friend of the Guild,” helping out with the volunteer hours, though she didn’t sell any crafts there, but she says she gave that up last year.

“I’m downsizing, so I can free myself up!” Shaw says, giggling. Of her bible study day, she says “there are a bunch of gals that come to my place, we just have a real nice get together, coffee and tea and chat.”

And she makes dinner for people she thinks need it.

“I really enjoy cooking, and if I am going to be cooking for myself, I might as well cook for a bunch,” says Shaw. Or if she is cooking for a bunch of people, she says she’ll make up some extra plates and take them out to people. She says its different people, whoever she thinks needs a meal, whether they are busy, or not getting the nutrition they should be, and she really enjoys when she gets to share the meal with them. 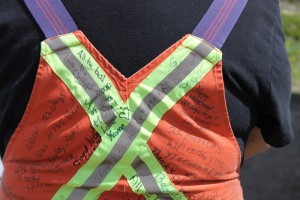 So what is she planning for retirement?

“It’s very fluid right now; it is sort of a work in progress,” says Shaw. “I really want to see my family and my grandkids, I miss them a lot.” They are all over BC, from Vancouver to Prince George, so she is starting her retirement with some traveling and visiting. She says she’ll start out with a month, and see how it goes.

But she is not planning to sell her house, or move away. “No, I’m staying here, I love Valemount. This will be home base,” says Shaw, “but I just need to get out of town for a while and just try something different for a bit.” She says she wants to look at different scenery, visit friends she hasn’t seen in a long time, reconnect with family, and just sort of recharge.

“Retiring, it’s sort of a milestone, I feel like I am graduating,” says Shaw, and the community seems to think so too. Friends and residents have been signing her cover-alls with best wishes, like a high school yearbook.

On Saturday, a number of friends and community met Shaw at 4 pm to escort her out and lock the gate on her final shift at the Valemount Transfer Station. They then had a potluck at Bonnie Marklund’s.