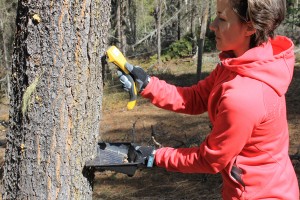 Ashley Derry used a paint scraper and a modified dustpan to collect samples of bark from a tree. Nearby, Craig Dunn lowered a measuring device into a residential water well, and then checked the readings on a small computer back at the truck. He then dropped collection container into the narrow pipe to take a water sample, while Derry finished taking some samples of soil and measurements of carbon dioxide. She also checked the temperature about 30 inches under the surface, using a special thermometer pushed down a peg-hole she’d just created. Then the two sat for a few moments, entering data and measurements into a computer program. The whole thing took them about an hour, faster than their first run earlier that day. They were here testing the process and the tools that others will be using later on in the season, so they know what to expect.

Dunn and Derry were in Valemount this week with Borealis Geopower, trying to determine the potential costs of drilling to generate power on their geothermal lease. Dunn says they have let two of their leases in the Canoe Reach lapse – the ones further south – because the potential in them is equal to the potential closer to town; and the closer to town the better.

On Monday night, April 28, Dunn and Derry met with about 15 interested locals at the Three Ranges brewery to talk geothermal, and to explain why they are testing residential wells outside of their lease area.

“Every well is an exploration tool that we don’t have to pay for,” says Dunn, Borealis’s chief geologist. He says it is basically a trade – they get to test temperature and chemistry at depths without having to drill, and the homeowner gets a little bit of information about their well. He can tell the homeowner a bit about their well, like the water depth, and whether it has a soft or hard bottom, and the homeowner can get copies of the chemical results when they are done.

What Borealis can figure out from a number of wells and from other data they’ve recorded is where the “exciting faults” are. He says they’ve already figured out that the Rocky Mountain Trench is the most important one – where the heat is flowing – but they need to figure out which faults intersecting with it are the most promising. They want to know where the heat comes closest to the surface, so it is less expensive to drill. They can only build a production well in their lease area, but information around their lease can help them pinpoint those faults.

And it can help the whole community too. Dunn says the best heat range for a binary turbine (where the heated water stays in the earth, but heat is transferred to a secondary closed system that produces steam to turn a turbine, creating electricity) is between 140 and 170 degrees Celcius, and there will be a lot of heat left over after generating electricity. That heat can be used for something like a greenhouse, or for drying wood, and that is why he’d prefer the project be closer to town. Of course, he needs year-round access to the generation site (another reason to let the leases further down the reservoir lapse – lack of maintained road access), but having something nearby that can use the excess heat can actually make his system more efficient.

But the other way this well testing can help the community is by showing us potential for lower temperature heat, closer to the surface, and right in town. While they are finding the higher temperature potential, they are also finding the other areas of heat that can be used directly – for things like greenhouses, drying timber, or for heating business districts or groups of residential buildings.

Dunn says retrofitting existing buildings is generally more expensive than it is worth, but for someone thinking about building on one of the large lots in the village, like Saas Fee’s proposed condo site, direct use of geothermal heat could be a big benefit.

“I can help you develop a resource,” says Dunn. “You’ve helped me.” With results from 10-15 wells, he estimates he could find the depth for a viable direct use project within a few months.

“It is all about thinking with the end goal in mind,” says Dunn. He says Borealis chose Valemount because it has a very hot spring, it is on a very large fault, and it is at the end of a power line, but he has been more than impressed with the response and interest from local people. He says they are very appreciative of help from people like Owen Torgerson, who is helping arrange access to wells with willing homeowners, and the homeowners themselves.

Dunn says the Canadian Geothermal Energy Association has done a great job of bringing geothermal power potential to BC Hydro during hearings for the Site C dam which would see the Peace River flooded. He also says Kinder Morgan, who will need more power between Rearguard and Kamloops if the expansion of the Trans Mountain pipeline is approved, has been “extremely helpful.” He says they listened and were encouraging, when most other big oil companies dismissed them.

Dunn says they will be testing more wells over the coming months, as well as continuing with other exploratory work. He’s hoping to start a slim hole drilling program this summer.