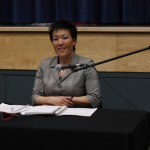 All-candidate forums were held in both McBride and Valemount last week so residents could hear the provincial MLA candidates for themselves. 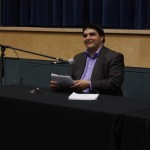 Bond was not able to attend the Valemount forum in person, however, because a fatal accident closed Hwy 16 to traffic for most of the afternoon. Bond was still able to participate via videoconference.

The Valemount forum was sparsely attended by only about 30 people. If you missed the forum, you can watch the VCTV coverage of the event and several one-on-one interviews with the candidates before and after the event.

A fourth candidate from the Christian Heritage Party, Donald Roberts, announced his candidacy after the forums had occurred.

A recent poll has put Shirley Bond slightly in the lead, however with margin of error Bond and Ogasawara are in a statistical tie.

The BC Provincial Election is May 14th.