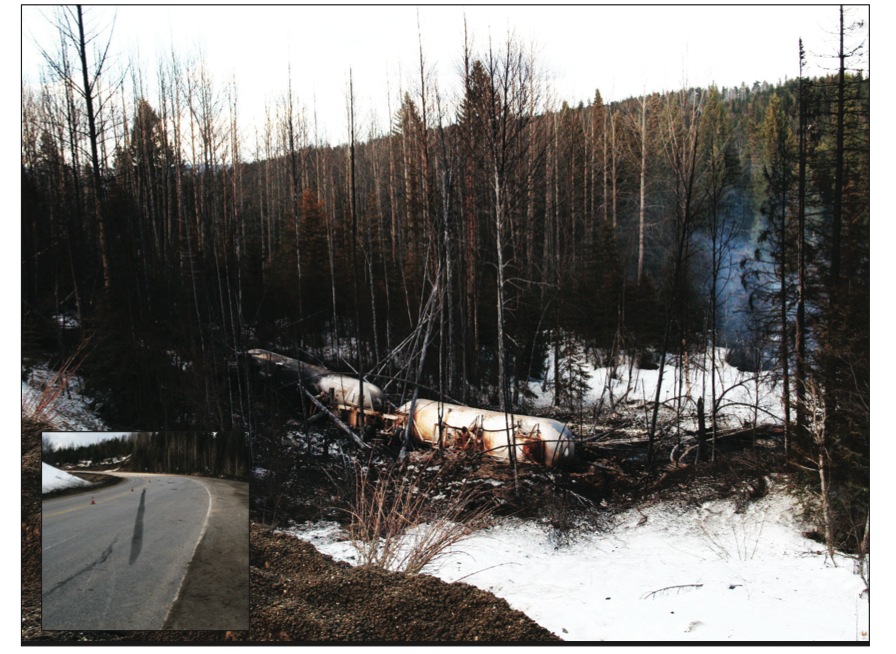 A B-train semi carrying propane crashed while heading eastbound on Highway 16 March 30th at 10 pm. Although the driver escaped with only minor injuries, the crash resulted in a series of chain reactions and explosions which forced emergency officials to close Highway 16 to all traffic for several periods between Tuesday night and Saturday evening.

The crash occurred on an infamous hill just East of the Dome Creek community turn out. The offset corner on a steep hill leading to the highway bridge over Dome Creek has been the site of several accidents including some fatalities.

Corporal Barry Kennedy of the McBride RCMP detachment says that at this time they are not releasing the driver or company name since the accident is still under investigation. He says his detachment was first alerted about the accident when residents in Dome Creek reported a massive explosion and fireball from their homes several kilometres away.

“The first tank blew up within seconds of impact,” Cpl. Kennedy said. “The second tank remained on fire and leaking. It was venting propane which burned as it escaped.”

The highway was opened Thursday for a few hours allowing only single lane escorted traffic through, but it was closed again on Friday as crews developed a game plan to deal with the remaining leaking propane tank.

“At the rate it was going, it would have taken two weeks for the second tank to empty and burn off so crews placed explosive and opened the second tank right up, allowing the remaining propane to burn off all at once in about 20 minutes,” explained Kennedy.

LPG Emergency Response Corporation out of Alberta handled all of the burning off operations. They were called in by the trucking company.

Kennedy confirmed that environmental officials were on scene and they have ensured that there was no environmental damage to Dome Creek itself.

The McBride Volunteer Fire Department was dispatched, but were not used on the scene.

The driver has since been released from hospital for treatment of minor burns and a dislocated shoulder.