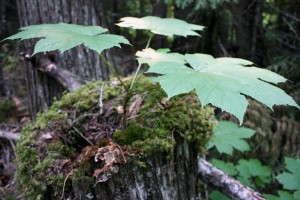 The 58th Western International Forest Disease Work Conference will be held in Valemount Oct. 4-8 2010, drawing 50 to 100 forest health professionals from across North America, and possibly from other countries as well.
While the majority of events will occur at the Best Western Hotel, many events and presentations will also occur in the forests of the Robson Valley.
Richard Reich, Regional Forest Pathologist with the Northern Interior Forest Region, has been a driving force behind bringing the event to Valemount.
“I have loved coming to the Robson Valley, both because it’s a great place to work, but also to get to know the people.”
Forest pathologists participating in the conference will hear leading researchers discuss a range of forest health issues ranging from how disease impacts local harvest levels, predictions of climate change impacts, how to manage root disease, foliar disease epidemics, exotic disease introductions and other topics.
Reich says that when the McBride district was transferred to the Southern Interior in 2003, he didn’t let go of his project work in the area. He has been busy for the last four years trying to complete a large project and is elated by a recent district change bringing the Robson Valley back into the Prince George forest district.
Reich says it is these forest health projects that led to the decision to host in Valemount..
He says for some time he wanted to resurrect a very unique project that he started in 1991 in the Robson Valley – the aerial sketch mapping of the distribution of Armillaria root disease at the northern limit of its range.  When Michelle Cleary was hired in 2007 as the new forest pathologist in Kamloops, he asked her to collaborate with him.
Cleary came up with the idea of holding the conference in Valemount.  She felt that the area was truly unique and offered sights and history that would intrigue participants
Cleary, the Regional Forest Pathologist for the Southern Interior Forest Region, says the forest disease conference is the largest and most influential gathering of forest pathologists in western North America and is specifically designed as a forum.
She says she is excited to showcase the rugged beauty of the Robson Valley, as the backdrop for this conference.
“Not only is there plenty of interesting forest diseases and projects, and a wide variety of forest types, but the natural beauty of the surroundings is breathtaking,” Reich says. “How often do people get to view the tallest peaks in the Canadian Rocky Mountains, visit rolling sand dunes covered with unique pine forests cultured by dwarf mistletoe, and see the northern boundary of North America’s most significant root disease all in a day?”
Reich’s excitement extends to the village as a facility for the conference as well. He says Valemount is ideal for hosting the conference.
“It’s very cosy and welcoming, and being nestled in the Rocky Mountain Trench, offers great views in all directions.  People attending this conference love the outdoors and like to get out and experience things they haven’t seen before.  They will especially enjoy the trail system around Cranberry Marsh where they can see and photograph wildlife and scenery.”
The forest disease conference comes to Canada only every four or five years, and typically does not return to the same region for at least 20 to 25 years. Last year’s conference was held in Durango, Colorado.
Reich strongly encourages local participation since the public and local forest community directly benefits from the exchange of information and interaction. It is expected that the majority of participants will fly into Kamloops, and a charter bus has been arranged to transport participants from Kamloops to Valemount on October 4th.