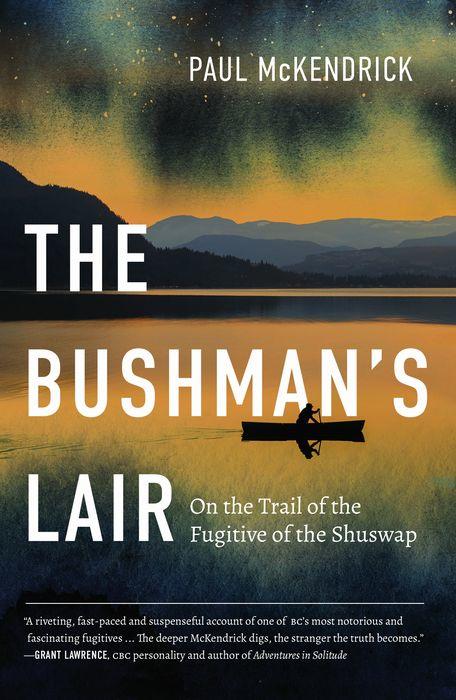 PAPERBACK  |  IN STORE ONLY

In the summer of 2002, the discovery of a cave on Shuswap Lake in British Columbia by a group of houseboaters made headlines across the country. It had been the hideout of a fugitive known as the Bushman—real name John Bjornstrom—who had been arrested the previous winter after raiding cabins in the area for supplies.

Shortly after the cave was discovered, and before it was imploded by local authorities, author Paul McKendrick was able to explore the nine-hundred-square-foot bachelor pad. Its elaborate construction left the impression that the occupant was more than just a common thief with a preference for uncommon living arrangements.

Nearly two decades later, McKendrick set out to better understand what led the Bushman to the cave. The Bushman’s Lair is the culmination of numerous interviews, reviews of RCMP and court transcripts, declassified us government files and McKendrick’s own adventures in the Shuswap. The resulting book follows Bjornstrom’s circuitous path: a child of Romani refugees raised by nature lovers from Norway; a bizarre, top-secret us government program that recruited individuals with supposed psychic abilities; an investigation into the infamous Bre-X mining scandal that led to an alleged hit list; and an ardent mission to safeguard vulnerable youth from abuse.

While some mysteries remain unsolved, McKendrick’s exploration of Bjornstrom’s story is an unexpectedly moving and unforgettable account of a man who decided to pursue a quest with boundless commitment.

Reminiscent of John Vaillant’s The Golden Spruce and Jon Krakauer’s Into the Wild, this fascinating portrait of a far-from-ordinary fugitive makes for a page-turning read.