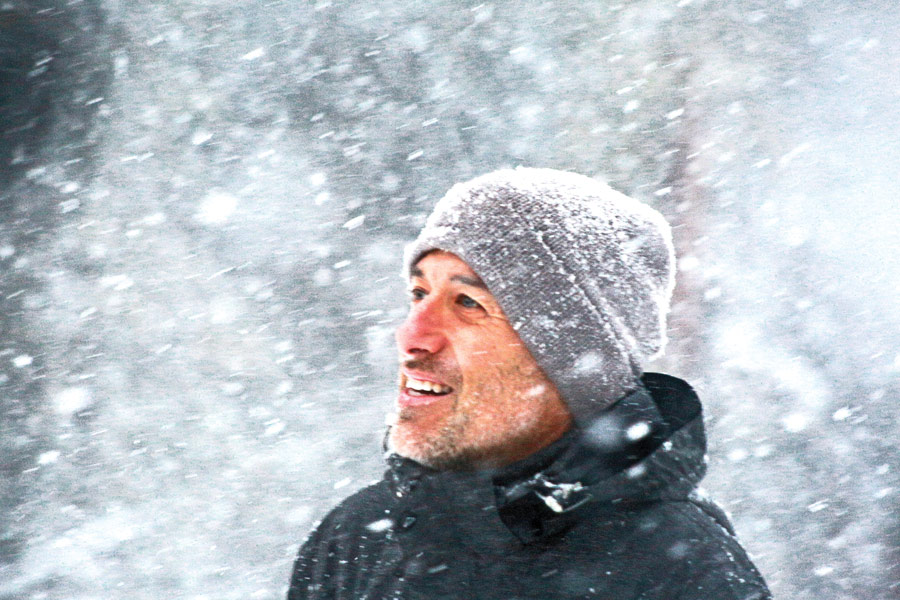 Frances LeClerc is heating his home just outside of Valemount with a German-designed boiler and he believes this technology could help Valemount grow and prosper. The system uses high-tech automation to burn fuel incredibly efficiently, resulting in smokeless heat. The fuel? Wood chips made from slabs cast off from small local mills.

Almost free, is how LeClerc characterizes it.

In a small building a few hundred feet from his home lives LeClerc’s unit. One half of the building is an 8×8 ft enclosure dedicated to wood chips, the other half contains a boiler and the control system that runs it.

As I arrive at his house in the blowing snow, the burner is smoking slightly, which is unusual for the machine. LeClerc has been testing using different fuels in the boiler. His current batch of wood chips were from slabs of

Douglas Fir harvested this summer… a little too wet. The system which runs best on wood chips with about 20% moisture content.

LeClerc decided to purchase a Heizomat system for himself when he moved to Valemount, but he got more than he bargained for in the transaction: he also became the regional sales representative for Heizomat.

The self-described workaholic moved to a Valemount a year ago, a step taken to rebuild his health.

LeClerc said the system is perfect for Valemount, because the community has so much wood waste that is freely available and it addresses the community’s battle with woodsmoke.

“I just love biomass and the work it creates in the community,” said LeClerc. “It is the greatest thing. You go get the logging waste and slabs from the sawmill. I’m helping sawmills get rid of something they are having an issue with, and it’s free.”

LeClerc happens to be sensitive to woodsmoke.

“Some nights I don’t go to town. I go to pick up the kids from school and I turn off the heater in the truck. I am personally not able to breathe smoke,” he said.

“When I moved to Valemount I saw the problem: air quality issues, no natural gas and no affordable heat. This is the perfect solution. It creates work in the community to make wood chips and deliver them.”

The technology isn’t for everybody, single family homes would balk at paying $28,000 for the boiler, not including shipping and installation. Where the solution starts to make sense is for a cluster of homes or a large commercial building.

“All the large buildings, hotels, the curling rink and the schools are on propane; switching to wood chips, the cost savings are huge,” said LeClerc. “My fuel is just about free to produce.”

High tech wood heat
The machine operates a little like a pellet stove: an auger moves the fuel from the hopper into the burn chamber, a combustion fan blows directly on the burning chips to bring the system to about 90% efficiency.

It’s a marvel of automation, heat exchanger tubes inside the unit are constantly being cleaned, a computer screen gives the user an inside look at what’s going on, available to view from anywhere in the world.

Making chips
LeClerc has a Heizomat wood chipper, but he says his goal isn’t to become a fuel company, rather bring the technology to the region and province.

“I’m here to bring the system and make it affordable. It doesn’t look like a lot of people know about district heating and how great it can be,” he said.

“Why have a huge furnace room when you can have one boiler doing 10 buildings? If people were aware, they might be interested in the concept.”